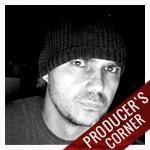 Sean McDonald has produced records for indie faves like The Clarks, Grapevine, Carroway, and Mercury, but is best known for his work on the American Soundtrack and My Music series. These record setting PBS shows have grossed more than 80 million dollars.

Branching out into surround mixing, Sean was picked to mix a new series of live concert broadcasts from Velocity Broadcasting. The In Higher Definition series is closed circuit programming shot in HD and 7.1 surround. Winton Marsalis is the first artist scheduled to appear.

1. Korby "Stubby" FET
Its not the most expensive mic I have, but never, ever disappoints.

4. AKG BX20
Well, its really big which is cool. But more importantly it has such nice, subtle, spooky reverb tone that I haven't found anywhere else.

5. Yamaha Maple Custom 24" Bass Drum
I have many drum sets, but this kick drum is very special, just perfect. Resonate, but solid and defined.

6. Empirical Labs Fatso
Great compressor that can thicken sources, and can soften strident edges. Works well on over heads, and acoustic guitars.

9. Electrix Filter Factory
All sorts of great sounding filters, and distortion, no plug in can touch this thing.

10. Manley Variable-MU Compressor/Limiter
Makes everything better, just like a hug from mom.