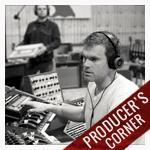 As a multi-talented producer, mixer, engineer, songwriter and musician, Kevin Augunas offers a dynamic depth and knowledge of equipment, production, and song crafting which has afforded him a freedom to capture the energy of a recording in a truly detailed, delicate approach.

Bar none, he owns one of the highest quality, meticulously selected vintage collections of recording equipment that Vintage King has ever provided. His inventory spans from the most esoteric classic outboard gear, microphones, and recording consoles to the most insane instrument and amplifier accumulations one could ever witness.Kevin Augunas started out as a session Bass player.

While playing in different bands, Augunas would end up recording low budget demos around NYC. Eventually Kevin began engineering the sessions himself when the studio assistants provided were not capable of getting the results the bands were trying to achieve.

Over the years he collected gear when on the road (pre-eBay) and ended up putting a studio together back home in L.A. Kevin found himself spending more time in the studio and less on the road playing bass. The impressive collection of gear is anchored by his EMI TG12345 Mark IV recording console. It is one of two consoles that were specially built for Abbey Road Studios in London.