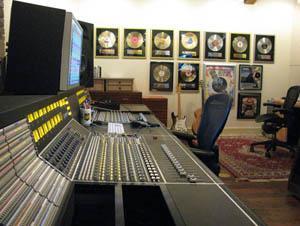 After reviewing the options, it was decided that a 32 channel API 1608 console would best suit the studio's needs. In order to add a producers desk and onboard Patchbay, a custom designed Sterling Modular frame was incorporated, providing and overall clean factory look.

Vintage King technician Richard Hunt, with the input of Michael Marquart and Skip Derupa, designed the studio’s patchbay and cabling layout, seamlessly integrating it with the existing studio wiring, outboard and Pro Tools HD system. A set of ProAc Studio 100’s with a Bryston 3b were added for mixing along with a few pieces of select outboard and a Bryston 3B/custom headphone system.