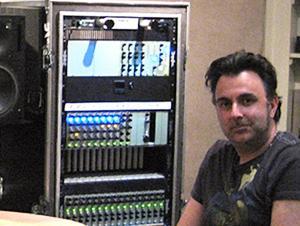 Producer/Mixer Tim Palmer, is one of alternative rock's most unsung heroes. In the early 1980s, Palmer worked as an assistant engineer at Utopia Studios in London, England, helping musicians like Mark Knopfler and Dead or Alive. Throughout the latter half of the 1980s, Palmer became a producer, and his keen ears and technical knowledge contributed to edgy post-punk groups such as the Mighty Lemon Drops, the Mission and Gene Loves Jezebel.

In 1989, Palmer produced David Bowie's debut LP with Tim Machine. Much of Bowie's output in the 1980s was chastised for its slick pop, but Palmer emphasized Tin Machine's scrappy guitars and thunderous drums, laying the foundation for Bowie's artistic comeback in the 1990s.

Palmer started to focus more on mixing and remixing in the 90's, offering his skills to diverse and alternative groups like Mother Love Bone, Pearl Jam, James, Catherine Wheel, Ned's Atomic Dustbin, the Cure and Concrete Blonde. In 2000, Palmer mixed several tracks on U2's All That Can't Leave Behind.

This Tonelux Portable Mixing System started out with Vintage King's Mike Nehra consulting Tim Palmer for his console needs. Tim was looking for a portable mixer solution to run his tracks through that could provide a flexible 24 channel line mixer with control room functions, effect sends and stereo returns.

VK’s tech shop then designed the patch bay, wiring configuration and mounted the system in two portable road cases to house both the Tonelux system and several pieces of outboard gear. This way Tim could take the portable mixing system from room to room.

"I have recently put together a mix facility in North Hollywood called '62' I needed to have a flexible set up that could accommodate the new climate in our industry," Palmer stated. "I wanted to embrace the old and the new. The 'Tonelux' summing amps let me keep a traditional analogue signal path, but with the control of the digital world. I am super impressed with the compressors, and EQ. The EQ has a classic crisp top end that is musical without being too pointed."