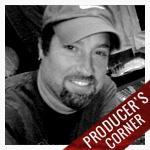 As both a Grammy-award winning producer and a professional musician, John Shanks has been able to see both sides of the coin and use it to his advantage in the studio. Originally, Shanks began playing in Melissa Etheridge’s band in 1988 and toured with her for several years.

In the early 1990s, he enjoyed his first string of writing success by drafting cuts with Bonnie Raitt, Joe Cocker and Tuck & Patti. Reuniting with Etheridge in 1995, he collaborated with her on songs for Your Little Secret, along with co-producing her subsequent album, Breakdown. The latter would go on to receive four Grammy nominations, including Best Rock Song and Best Rock Album.

In January 2001, Shanks began working with Michelle Branch. Together, they wrote four songs for the hit album The Spirit Room, including the first single, "Everywhere". In the fall of the same year, Shanks co-wrote Sheryl Crow’s single, "Steve McQueen".

In 2004, Shanks produced three songs for Kelly Clarkson's hit album Breakaway, including the title track "Breakaway", and worked with Anastacia on two songs for her self-titled album, including the single "Welcome To My Truth."

The following year, Shanks would go onto win the Grammy Award for Producer of the Year, Non-Classical in 2005 for his work on "Breakaway", Hilary Duff's "Fly", Robbie Robertson's "Shine Your Light" and Alanis Morissette's album So-Called Chaos.