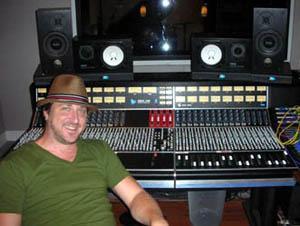 Matchbox Recording Studio, in Austin, Texas, has an abundance of both vintage and new analog equipment that, when coupled with a Pro Tools HD3 system, lends authenticity and a somewhat indescribable "organic heft" to the many projects that are recorded there.

Owner and operator Dwight Baker, an accomplished songwriter (Kelly Clarkson) and drummer (Heart, Enrique Iglesias) in addition to a seasoned sound engineer, recently replaced Matchbox's vintage API 2244 with a brand new 32-channel API 1608 small-frame console so that his studio would still have the "API sound" that he loves so much.

"I absolutely loved my API 2244," remarked Baker, "but there is a shortage of good techs here in Austin. So when the 2244 went down, I called Mike Nehra at Vintage King for help. We have a full calendar of both up-and-coming bands and big ticket acts like Kelly Clarkson, and down time is absolutely disastrous. Since I prefer the sound of API gear to anything else, the new API 1608 was the perfect solution."

"I put some Avedis MA5 pres in the open slots so I can inject some Neve tone here and there," Baker says. "It's cool (and a little weird!) to have other colors on an API console!"

Since its arrival three months ago, the 1608 has performed flawlessly. In addition to the classic API sound, which Baker fully expected, the engineer was pleased to find that the new console has significantly greater headroom than his old 2244. Drive-Thru Records artist, Halifax, and Universal Records artist, Bob Schnider, have both had the pleasure of recording their latest projects on Matchbox Recording Studio's latest addition.