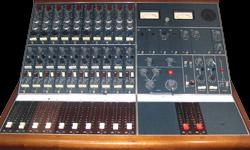 Earlier this year, Vintage King Audio's Darrin Fendley worked with Grammy Award-winning band Wilco on the purchase of a new console. Thanks to some in-studio inspiration, finding the right fit for the band's lauded recording studio, The Wilco Loft, wasn't too complicated.

While Wilco was recording their self-titled 2009 release, producer and engineer Jim Scott brought his own Neve BCM-10 sidecars loaded with 1073 & 1079 EQs into the studio for the session. Wilco fell for the sound and contacted Fendley shortly thereafter to get a BCM-10 of his own permanently installed in The Loft.

“Vintage King has assisted with outfitting the Wilco Loft since August 2008,” says Fendley. “We’ve set the studio up with mic pres, EQs, headphone systems and mics over the years. The BCM-10 will definitely round out The Loft’s roster of gear and give the band an opportunity to capture the tone of the classic records they grew up on.”

Most recently, Tweedy collaborated with legendary soul singer Mavis Staples as producer on her forthcoming album You Are Not Alone in the Wilco Loft. Vintage King looks forward to hearing what the band will do next with the newly installed BCM-10.