The Lost Ark Studio Picks Up A SSL Matrix 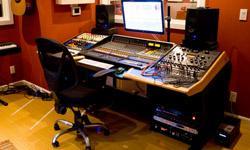 When Paul Cavanaugh and Scott Kennerly started looking to add outboard gear to an existing home studio, they turned to pro audio forums like Gearslutz and Tape Op for the most trusted and recommended source for gear.

Vintage King Audio was at the top of that list and Cavanaugh and Kennerly quickly began working with Jeff Leibovich. It was right around this time that the partners also realized they were outgrowing their home studio so they set out to expand the Lost Ark’s location and gear list.

The space was built around an SSL Matrix and Pro Tools HD rig from Vintage King Audio. To supplement the board, Leibovich sent The Lost Ark his personal “wish list” of gear, suggesting a number of boutique options, such as the Retro Instruments STA-Level, 176 Limiting Amplifier and 2A3 EQ, which they purchased.

“We’ve been really impressed with how all of the Retro Instruments gear keeps the natural vibe of the tracks but add their own magic,” says Cavanaugh. “And the SSL Matrix’s ability to move quickly from Pro Tools to the analog world and back again has been a big plus as well.”

When asked why The Lost Ark, a project studio available to local artists at no cost, turned to Vintage King Audio, Cavanaugh stated, “Everyone knows that it’s a price sensitive world out there, but it was important for The Lost Ark to have a relationship with a trusted source – a company that would be straight with us and stand by what they sell.” He continues, “Vintage King has been that and Jeff is great to work with – he cares about what we’re trying to do and he doesn’t just sell the gear, he knows the gear.”