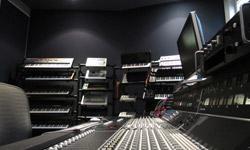 Juno Award Winning Composer and Producer Ian Nieman is no stranger to API gear, or Vintage King Audio for that matter. Having owned the API 8200, 7800, 205’s, 550a’s and 560’s, the API 1608 recording console instantly grabbed Nieman’s attention during his search for a new console.

When the time came to outfit the new room at his production company Nieman Music, Ian contacted Vintage King’s Mike Nehra to inquire about the 1608. As a client of Vintage King’s for nine years, Ian knew he could trust VK while outfitting the new space, designed by Martin Pilchner.

“I still remember the first call I made to Vintage King,” Nieman says. “I was in the market for a microphone and compressor and heard from various sources that Vintage King was the place to go for quality vintage gear."

Nieman worked with Nehra, asking questions about products, until he finally agreed upon a Neumann U-67 and Neve 33609. "It wasn’t until months later that I learned Mike actually owned the company." Nieman says. "That has always stuck with me. It illustrates Mike’s approachable personality, love for gear and desire to help the client. He always has time to answer questions and his recommendations to what best fit my needs are still scoring big today.”

While working on the 1608 purchase, Nieman also decided to pick up the Shadow Hills Mastering Compressor based on Mike’s recommendation. Ian first used the Mastering Compressor across the 2 buss and hasn’t moved it since, thanks to the layer of polish it gives to the overall final mix.

After working with Vintage King’s Jeff Leibovich on the details of the API purchase, including furniture from Sterling Modular, Ian’s first mix on the new setup was for the single “Move With It” by Linnea, which recently hit #10 on the Billboard Club chart. Additionally, Nieman has remixed material for artists like Mariah Carey, LeAnn Rimes, Deborah Cox, Nelly Furtado, Ludacris and Snoop Dogg.