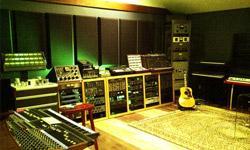 Originally from Caracas, Venezuela, musician Merlin Moon is an artist with a deep appreciation for vintage recording equipment and the rich sounds they encourage. Pizzorni first consulted with Mike Nehra and Vintage King Audio in 2004 on a pair of Neve 33102’s, Neve 2254e compressors and handful of additional outboard gear. As his studio grew, so did his gear list; Pizzorni began working with Vintage King’s Jeff Leibovich last year.

“In today’s world, we can blend the sound of vintage discrete technology with fast tools to get every possible idea out when the creative spark hits our brain,” says Merlin Moon. “I have never been in love with the sound of modern gear, except for the Inward Connections Vac Rac, which I’m learning to love, and the beauty of my two Mytek converters.” He continues, “I have A/B’ed more than a hundred mics against my ELA 251 and the closest match to its smooth and beautiful sound is the AKG C60/CK4, another vintage mic that I also bought from Vintage King. I have a pair of those for my piano and when I turn them on, something magical happens with the sound of my compositions.”

After releasing his debut album “Stoned By Dreams” in 2008, Merlin Moon spent much of the last few years composing what eventually became “Bohemian Side of the Sky,” his sophomore album, recorded in part at Merlin Moon studio and mixed by Mark Needham (The Killers, Fleetwood Mac, Bloc Party).