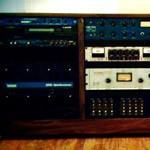 513 Analog Recording Inc. is a locally owned and operated recording studio in Tempe, Arizona. Under the direction of owner Catherine Vericolli, the studio maintains an analog focus with the modern technologies (and convenience) of digital mixing and editing.

In addition to the impressive list of outboard gear that 513 Analog acquired, Catherine specifically connected with Schneider for Pro Tools HD Native, which Vericolli and the rest of the 513 team are currently acquainting themselves with. Making the move from Pro Tools 7.4 to 9, the studio embarked on a total makeover.

“513 Analog had already purchased a Trident console locally, so they were looking for gear that would fit well in the new mix suite,” says Vintage King's Jacob Schneider. “Between the gear that the studio had already purchased from Vintage King – such as their first Culture Vulture and custom racked pair of Neve compressors – and their growing wish list, we secured a really great variety of equipment for the studio.”

513 Analog, Inc. first tackled their list of new 500 series mods, including the API 512 reissues, which they purchased from Vintage King. While searching for a more affordable EQ to add to their lunchbox, Jacob suggested the Inward Connections Step EQ, now known as the Inward Connections Impulse, after the unit underwent some major aesthetic and sonic upgrades, including the VF-600 discrete amp block. Additionally, the studio purchased gear from Shadow Hills (Mono Optograph), API (the 2500 SB compressor and the 525s) and more.

“We’re really excited about the new API gear being installed,” says Vericolli. “The 2500 was a great suggestion from Jacob. We were originally looking into getting some other compressors, but the 2500 was a more cost effective option that allowed us to stay within our budget and still provide the options that we wanted for our clients.”

“Our new outboard options are a perfect combination with our old vintage gear and allow us to bring in more guest engineers. Working with Vintage King [on these purchases] has been awesome. The customer service and affordability outweigh any other gear company I’ve dealt with,” Vericolli continues. “They are super knowledgeable and honest about all the gear that they sell, which is a huge plus for newbies like us. Bottom line, if Vintage King carries it, we trust it.”