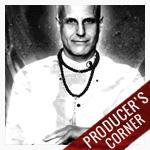 A prolific composer and videographer, Lee Negin started recording and releasing his work in the late 1970s, and was involved in the international Indie/Techno/New Wave movement of the 1980s. His music received international airplay, including by the highly influential Jon Peel at BBC Radio, and he collaborated with the founders of the Detroit Techno scene.

Returning to recording after an extended hiatus (the release of the Balance in 1994), his classic techno track “Nothing Goes Right” (1981) was re-released on a compilation from Berlin based Genetic Music in 2010. Since then, Lee has released several videos and recordings. In 2011 alone, Negin released two albums, Hungry Ghosts and an ambient/electronica experimental work, Wu Wei. Both records were mastered in London by Jon Astley (The Who, Led Zeppelin, George Harrison, ABBA, etc.).

2012 will see the release of a 2-CD opera (slated for February), and more, including a tour of Europe and some Asian cities. Originally from the USA, Negin has lived in India, Japan (15 years), the UK, Poland, and for the past 5 years, in Seoul, Korea.

Vintage King recently sat down with Negin and talk about some of his favorite studio equipment. Here are is his essential picks for must-have gear:

1. Focal Solo6 Be Monitors
I mixed 100% of Wu Wei with these. When I listened with my mastering engineer, Jon Astley, in his London studio (formerly Pete Townshend’s studio, where he wrote “Tommy.” etc.), Jon said it sounded very good — even on his exotic monitors. High praise, indeed.

4. Shadow Hills Equinox
Incredible gear. Like having a high-end console (in terms of function and sound) in my rack. Part of my new studio upgrade, and a great Ryan recommendation!

6. Audio Accessories Patchbay
Makes a lot of difference. Patchbays used to intimidate me, as far as set up, but the boys at Vintage King set it up for me, and it was plug and play.

7. Dangerous Music BAX EQ
When I run my mix through it, it really opens things up.

9. Radial Engineering EXTC 500
Allows me to get tracks out of the box and through my collection of effects pedals easily.