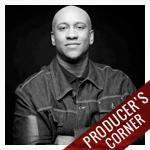 Perhaps best known as Sean Paul’s manager, Jeremy Harding initially made a name for himself as a producer, behind such hits as Beenie Man’s “Sim Simma (Who Am I),” Mad Cobra’s “Pet & Pamper,” along with Sean Paul’s “Infiltrate” and “Baby Girl” to name a few. Harding’s production credit and phone number were printed on Paul’s early 45s, which led to interested booking agents getting in touch with Harding to set up the artist’s first live shows.

It wasn’t until Sean Paul’s first full-length album, however, that Harding officially jumped on board as manager. Over six years later, Harding has become one of the most respected and prominent managers in dancehall, all the while working steadily as a producer and engineer at 2 Hard.

A graduate of the Trebas Institute’s audio program in Montreal, Canada, Harding returned to Kingston with an expansive knowledge of production and recording. Partnered with an interminable work ethic, he carved out a name for himself on the Kingston music scene by producing on projects like the Dancehall 101, Reggae Gold and Strictly the Best CD series’ as well as albums by Beenie Man, Sean Paul, Devonte & Tanto Metro, Elephant Man and more. He opened 2 Hard Recording in 2008, which was acoustically designed by Francis Manzella of FM Design Ltd.

With so many roles in the industry, Harding needed a space that would provide ample flexibility to cater to engineering, producing and recording. Manzella designed a modular setup where racks loaded with different types of gear can be wheeled to and from the main workstation based on Harding’s project at that moment. 2 Hard is centered around a Pro Tools HD rig and 24-fader D-Command set-up.

Vintage King’s Jeff Leibovich recently worked with Jeremy Harding on a package of outboard gear including two Neve 1081 Mic Pre/EQs, a Neve 33609 stereo compressor, a Purple Audio MC77 and a Retro Instruments Sta Level. “Jeremy has set a standard for other studios in the area by staying current with today’s digital technology but also maintaining a classic analog feel at 2 Hard,” says Leibovich. “The package that we put together creates that legendary sound often associated with items like the Neve compressor, which is hand built to its original 1970’s specs, and the Retro Instruments Sta Level, a Gold Edition replica of the 1967 Gates Sta-Level.”

Says Harding of his relationship with Vintage King Audio, “My very first purchase from Vintage King was a lunchbox of API 512c preamps in the late 90's - my ‘secret weapon’ that made my digital rig sound bigger than everyone elses at the time in Reggae.” Harding continues, “Living and working in Jamaica means that we don't have access to rental houses or a great deal of studios with well maintained vintage gear. I really have to rely on Vintage King to provide me with well-informed advice before I make purchases, as more often than not I've never gotten a chance to test or a/b any of the gear I'm interested in. So far, their batting average is 100% with service, not only from a business standpoint, but also in helping me tailor my sound to my needs by always pointing me in the best direction, straight up."

1. Neve 1084 Mic Pre/EQ
Like solid gold for any audio source, hands down. Plug in and record, you can't go wrong. And the EQ is more generous than a 1073, so you got all angles covered.

2. API 512c Mic Pre
Nothing beats these for raw power and punch. On drums they slam hard. Even a drum machine running through these bring your samples to a whole other smack factor. You don't even need to EQ them after they track through these guys... Believe me.

3. Chandler Mini Rack Mixer
I was skeptical at first, but best believe there is some kinda magic in this box....Can you say independent transformers on every channel? Even running an already mixed song through 2 channels makes the mix bloom..It's dynamic but sticky at the same time, makes your mixes sound effortless.

4. GML 8200 EQ
For vocals nothing beats the GML for sheer precision or smoothness....It's very hard to make this unit sound bad...extreme perhaps, but never bad....The level of detail can take a vocal take from a very ordinary mic/pre combination source and make it sound "expensive"...That's the best way to describe it.

5. A-Designs Pacifica Mic Pre
They have a certain midrange energy that really makes synth sounds come to life, particularly on soft synths and virtual instruments. Nice for cutting guitar sounds too, very forward without sounding harsh or EQ'ed....A great secret weapon pre that always have people saying "What are you tracking that sound through?"

6. Purple Audio MC 77 Compressor
Classic blackface sound but with a modern sheen to it....For tracking vocals, it just puts it right in front of the speakers without sounding squashed or "reactive"...

7. TC Electronic VSS3 Stereo Source TDM Reverb
Software reverbs always sound cloudy and mushy compared to hardware stuff... Except this one. High class sounding, shimmery and very transparent. If you're looking for an airy sounding reverb that's felt more than heard, this software has the caliber.

8. Wunder Audio CM7-GT Microphone
I stopped using a vintage U48 in favor of this mic. Character for days with all the body of vintage Neumann mics, but more headroom and a little faster transient attack for a modern mix.

9. Cranesong HEDD Converter
Surprisingly great as an FX "tape emulation" box. Summing out of Pro Tools into this unit and then back in on two tracks really feels like you're listening to a multi-track tape instead of DAW outputs. Very versatile unit that's just "sounds good" even if you're not well versed on A/D/A conversion.

10. Antelope Audio Isochrone Trinity/10M
You don't know what you're missing until you hear it. Your entire studio sounds different. Your monitors just got an extended range. Your room all of a sudden reads low frequency bass response better. And your midrange sounds free and floating. Superior clocking makes your starting point entirely different, which affects every decision you make afterwards.