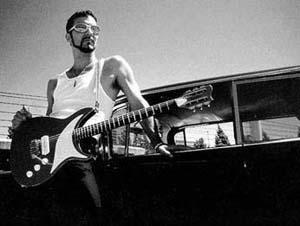 ASCAP Award-winning producer Devin Powers burst onto the music scene in the early nineties. His band, Cats:Choir, toured up and down the West coast and sold-out shows night after night. The band climaxed when their hit album, House:of:Dog, skyrocketed to the top of the European music charts. From there, Devin parlayed his success to tour and record with such legends as John Entwistle of The Who and Lee Rocker of the Stray Cats.

In 1997, Devin and his band The Vents signed, along with Blink 182, to MCA Records through independent record-label Cargo. The Vents national tour was highly successful, which resulted in Devin being courted by executives from Universal Film and Television. What was Universal's attraction? Devin not only plays countless musical instruments, he is also a top-notch producer and composer. He was hired as the Music Composer and Supervisor for the smash hit reality relationship show Blind Date, composing over three thousand musical pieces- including the show's memorable theme song.

"I work fast, really, really fast, sometimes writing, recording and mixing 40 tracks or more per week for TV, so my set up has many doubles and the patch bay rarely gets touched, Except when I get new gear!! I record into Pro Tools with as many tubes and transformers as I can put in between me and the digital world.

Because I play all of the instruments myself, I like to leave things ready to record and have a few standard setups depending on the sounds I need to create. On a daily basis these are the units that get crushed, rocked, twisted and tilted to create music that squeezes out of boob tubes around the globe.

Neumann U67 for female singers, U47 for males singers, Manley Cardioid w/ a Calrad 500 crystal or Webster crystal attached to side for overloaded distortion vocals. KM54 for acoustics.

The above mics are either patched into, Mercury Redd 47 mic pre/ Mercury 66 Limiter, Chandler Germanium / Universal Audio La2a or Neve 1073/ Retro Sta - Level on fast attack setting. Lately I have been using a Steve Firlotte modded Magnecorder mic pre that is really warm and thick as well.

My Gretsch Maple kit lives in the next room and is always miked with Neve 1073s kick / D12 and snare Sm57, Fairchild 662 pre / Sennheiser 421 on toms, Neve 1073/ Royer 121s on over heads. Additionally, I have an Altec 1567a mixer with 57s on kick ,snare and a 609 on over head coming in on a mono track , this sound rules! (Beatles, Beach Boys) An Ampex MX10 with an AEA 44 clone about 5 feet in front of the Kick, and two Shure Levelocs for stereo room. These micâ€™s never move and the pres are never touched, I am ready to play drums anytime by opening up 12 tracks.

Guitars and bass parts are tracked either direct through Neve 1272, a Mercury M72, Telefunken v72 or and Avalon 737, or a combination of direct and micâ€™s. I favor small watt amps Supro, Airline, Tophat, Marshall 20 watt, My all time favorite guitar amp is The Wizard modern classic 100 watt through 25 watt Celestion speakers, but itâ€™s load and my cat doesnâ€™t like it as much as I do.

For Reverb I love my AMS 16, and have an old Fairchild mono verb that I send up the center through the Stereo AMS for some old school spring chime. It reminds me of those old Donovan records, very organic, and the Fairchild/ AMS combo sounds unbelievable to me!

TC 2290 for Echo, I use two for different times. Is there anything better!!

Harmonizer vocal effect are either my AMS 1580 or a H 3000 Eventide, I love my AMS and The Eventide is not getting as much use anymore, but it has so many great patches that help with shading things that I keep it patched in and ready.

When it comes time to mix I have several stereo limiters set up with Eqâ€™s following them so I have many on the spot choices. These are all patched and ready to bring in as plug-ins inside my Pro Tools session.

The stereo bus usually has a Manley Vari-Mu into an Avalon 2055 (for ultra highs and lows) into a Massive Passive Mastering Version. This is my gentle chain and I barley touch these boxes and do not have them on all the time. When I want to make a statement I use a Shadow Hills mastering limiter into Mercury PQ-P tube EQâ€™s, this rig really can pump up the vibe quotient. My stuff goes straight to TV with out sweetening most times so I add whatever touches I think are needed, and I do the same for the Pop bands I work with so it sounds mastered when it leaves.

ProAc Studio 100s, NS10s and a Yamaha sub, that is barely on, help me find my way through the sonic jungle. My cat leave the room when I get a 4/5k build up, as long as he is sleeping under my board I know I am safe, when he leaves the room I know itâ€™s time for an ear break.

I send the Pro Tools tracks into a 32 channel Chandler EMI mixer and usually go back in on two tracks for the mix, for theme songs and pop songs I go DAT or CD burner.

Inside the tracks is where I have my magic dust limiters and eqâ€™s, which is where I guess I should list my fave pieces, although I love everything above and am not sure how I could live without them."