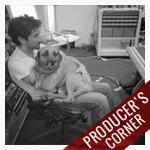 J.J. Wiesler is a producer, engineer, and guitarist based in San Francisco, CA. In addition to his career helping other makes music, he is a founding member and producer of Highwater Rising, who have released two full length albums and one EP since forming in 1998.

The In Between, HWR’s second release, paved new ground in the world of TV and Film licensing with over 25 placements in shows such as The OC, Sex in the City, Boston Public, Summerland, Northshore, and The Real World. JJ also produced, engineered and mixed Aidan Hawken's celebrated album Pillows & Records.

In 2006, for his songwriting and production contributions to The In Between and Pillows & Records, J.J. signed a publishing deal with Lionsgate Entertainment. Vintage King recently caught up with J.J. and talked shop about his favorite pieces of studio equipment:

1. Neve 1073
No surprise here. There are a lot of great preamps out there, but I just prefer the sound and feel of this one.

2. Digidesign Pro Tools
Hey, I love tape. I work on tape when its appropriate, but let's give it up to a solid DAW. The converters have come a long way. They pretty much capture what you give them. PT is a tool and you just have to get in there are find ways to work. You can't deny the great advantages it provides and it just takes time and a lot of experimenting to get sounds out of it that have the same harmonic content as a purely analog system.

3. Rupert Neve Designs 5042
Good little distortion box. One thing that computers and plugins really struggle with is non-linear systems and good distortion is one of them. If you work on the computer, it's helpful to have a selection of boxes that overdrive in pleasing ways.

5. Magnatone Amps
The true pitch vibrato is an essential tool for making things rub the right way. I put a lot of different things through it.

7. SPL Transient Designer 4
A really musical piece of gear that goes beyond sound shaping. You can actually change the feel of a drum beat with this by removing all the ambient sound or making it pump. All with only two knobs...

10. Rupert Neve Designs 5043
The 5043 is really clean and in feed-forward mode capable of transparent gain reduction. The 1176 grabs the peaks and i have the 5043 set for slower attack and it gets the longer tail stuff.