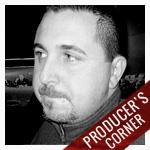 Mike Sapone is an American record producer, audio engineer, and mixer whose credits include producing music for records, TV shows and video games. In terms of his studio production work, he has worked on albums for Brand New, Taking Back Sunday, Envy On The Coast, O'Brother, Straylight Run, Hit the Lights and Public Enemy.

In 2009, Sapone reached the top of the charts with his work on Brand New's Daisy. The album debuted at number 6 on the Billboard 200 and was featured on the Best Albums Of 2009 lists from SPIN, Kerrang! and Rock Sound magazines. Additionally, Sapone produced Brand New's critically acclaimed The Devil And God Are Raging Inside Me, which was included in NME's Top 100 Greatest Albums Of The Decade and received a 5 out of 5-star review entitled "America finally gets their own Radiohead" from Alternative Press magazine.

Check out some of the gear Mike Sapone has purchased over the years from Vintage King and why they are staples of his daily studio work:

3. Purple Audio Biz
Purple has done nothing but blow my mind with every new release. On the "must have list!"

5. Tonelux TX-EQ4P
The Tonelux EQ has more magic and versatility than any other equalizer I've used.

9. Smart Research C1 Compressor
DRUMS!!! The C1 gives me that drum sound I'm looking for session after session. Outstanding for tracking and mixing on multiple sources.