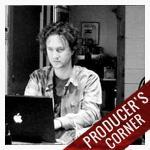 It is nearly impossible to have avoided the work of Greg Wells. The Los Angeles-based musician and Grammy nominated record producer has blossomed throughout the last decade, working with the who's who of artists. Wells has produced and/or written with Timbaland featuring OneRepublic, Mika, Deftones, Rufus Wainwright, Pink, Creeper Lagoon, Natasha Bedingfield, Team Sleep, Anna Waronker and The Veronicas.

Wells biggest success, so far, was his production work on "'Apologize" by Timbaland featuring OneRepublic which recently became the most played Top 40 hit of the past 20 years within a one week period. The song is ranked number 10 of the past decade and holds one of the longest stays in the top 10 at 25 consecutive weeks.

"To me, the best thing a record can have are songs that feel genuine for a compelling artist. The gear is enormously important, as is the arrangement and the players themselves, but without the match of a strong artist with strong songs, nothing sounds good," Wells says of studio success. "How many horrible records have been made at the world's best studios? The hardest lesson for me has been to remain objective. I advise against working brutal hours in the studio. The longer you work on a piece of music, the less chance you have of listening the way someone will hear it the first time."

If you're interested in finding out what Greg uses in the studio, check out this list of his gear favorite that he offered up to Vintage King: