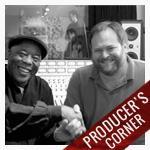 If you're in a rock band from Chicago, chances are you've worked with Doug McBride. He has amassed a long list of producer and engineer credits while working with all the majors and developing local bands. His studio, Gravity, has been busy since its inception fourteen years ago.

Doug's producer/engineer credits include Rachael Yamagata, Silversun Pickups, Fall Out Boy, The Walkmen, Veruca Salt and Buddy Guy to name a few. His studio has hosted sessions for artists ranging from Rod Stewart and Mavis Staples to Story of the Year and Rise Against.

More recently, Doug has been focusing on his mastering business, as well as mixing projects for a number of excellent producers. Check out this top ten list of some of Doug's favorite gear from throughout his recording career:

1. Barefoot Sound MicroMain27
These provide more "information" than any speaker I've ever heard. They are brutally honest and once you get things sounding good on these, they'll translate extremely well. Also, I've become a big fan of mixing w/o the need for a separate subwoofer.

2. Ampex ATR 102
Gotta mix to this. It just changes your mix just a bit, but that bit is always what it needed! The Spitz extended low end heads help as well.

3. Shadow Hills Mastering Compressor
Forget the aesthetics of the unit - It's the most versatile comp ever. The discrete comp is a cross between a G384 and a 33609. The opto side is fast as hell. I'd love to take it off the 2mix but that won't happen.

4. Thermionic Culture Phoenix (Mastering Version)
I auditioned one of these when they came out and didn't buy it because the VU's were hard to cal, as were the controls in general. With the Mastering Version (MV), they took care of those issues. I'd compare the sound to my old beloved Gates Sta Levels but with more control. They're versatile, but generally add an uncommon smooth flavor.

5. Drawmer 1968
Another tube comp, but this really is a bargain of a comp. It's great on bass, on OH's, on Room mics... The Big switch stays on all the time.

6. Sontec 432c9 EQ
This is the Holy Grail mastering EQ. It's like the 15th revision of the original design and it's many ME's go to EQ

7. Maselec MLA-3
Mike had to pull some strings to get this to me so soon after release and I can't (won't) send it back! It's the first multi-band compressor that I've heard that is powerful without adding unwanted character. I alter the shape of a mix, subtly, without the mix engineer feeling like, "You changed my mix!"

8. Magix Samplitude DAW
My favorite ME's were all using Sequoia and Samp is the little brother software. The first thing I noticed is that my source wav file sounded better simply being played back off this than it did off by expensive PT HD3 (same D/A mind you). Terrible manual, but once you get the hang of it, it's very powerful and sounds great. The included "Spectral Cleaning" plug is the coolest plugin I've ever heard!

9. Manley Vari Mu (Mastering Version)
I had the T bar mod and the HP sidechain mod done up front. I love what this does to 80% of the songs I master. The High Pass sidechain mod is so cool - They nailed the frequency -proven by the fact that I end up flipping it on about 50% of the time. It's like having two compressors.

10. Chandler LTD-2 (Mastering Version)
These are subtle but really useful. Often the meters are barely moving, but if I take the unit out of line I miss it. The makeup gain sounds particularly nice.