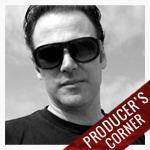 Steve Kravac has been producing, engineering, mixing and composing independent and major label recordings for the past 25 years. Starting in the wilds of the Canadian North, he got involved with punk rock acts such as The Nils, Doughboys and Asexuals.

Making the move to Los Angeles in 1994 to take a position as house engineer at the prestigious Westbeach Recorders in Hollywood, Steve immediately started racking up high profile clients. Yet, it wasn't long before Steve left Westbeach to go indie, and began working with artists like Blink 182, MXPX, Less Than Jake, and Pepper.

Steve is now writing his next chapter in the City Of Angels with the launch of Gourmet Sound, his joint venture with punk legend Greg Hetson. Together they have created an affordable-yet-professionally equipped recording facility. Gourmet offers industry standard digital recording technology, paired with all the front end vintage elements that discerning artists have come to expect from a great studio. Check out ten pieces of gear that Steve couldn't live without at his new homebase studio:

1. Neve 1064
These came out of a vintage CBC console and were repackaged by Brent Averill
for me. The tone never ceases to amaze; clear, punchy, open and glorious! I use them on everything.

2. Neumann U67
Straight from Vintage King baby... This one sounds amazing, I love it on vocals (obviously), bass and acoustic guitar. Thanks Ryan!

3. Eventide H-3000
I don't use a lot of outboard processing but when I need it... This is the Holy Grail. The Micro Pitch Shift patch is worth the price of admission alone! It's invaluable on vocals to give 'em a little spread, and it's awesome on acoustic or guitar of any kind. As reverb seldom works on vocal for me, I find that a combination of the MPS and a little slap delay gets me there pretty much every time.

4. 1973 Marshall JMP 50 Watt
This one came to me for $200 bucks about 20 years ago, it's a mainstay on every record I make. With no pre amp, you just plug in turn it up and play. Hetson says it's the best sounding Marshall he's ever heard, and he should know he's played a lot of them! I love 50 Watt heads you can open them up without bringing down the building. Such a simple clean circuit. Thanks Jim!

5. Z-Vex Super Hard On
This stomp box is one of the best I have ever used, Z-Vex makes great stuff and this baby takes any guitar tone to the next level. Never blown out or scratchy just more meat and potatoes... Isn't that what we all want? Fuck Ya!!!!!!!

6. 1176LN Black Face
An audio Creamsicle is what this is. It's the king on vocals and I love it on clean guitar as well. I found it in Montreal, languishing on a shelf in a Pro Audio rental shop years ago and snapped it up for about $700 bucks Canadian. Back then that was probably about $500 U.S. It has served me very well over the years. To please just squeeze!

7. DBX 160's
I have a couple of these and basically for tracking dirty guitar it doesn't get any better, The old 160 puts it in your face and never gets too pumpy for me. I track though it and then back buss through a pair when mixing. Invaluable!

8. ATR-102
I have to get me one of these for our room, simply put when you mix down, it's the only machine that actually makes your mixes sound better. Gives them the air up top and the bottom is tight and punchy. Don't be fooled by anyone telling you different, it smokes the Studer two tracks any day of the week for rock stuff, I don't trust anything else to mix down to. Simply the best! I use it with 456 +5 old school because that sounds awesome, no need to crush the tape, just caress it a bit, and it'll show you the love right back.

9. Shure SM-57/58
When I started out doing live stuff as a kid I would see English guys mic an entire stage with 57's and 58's, crazy right? Hell no, the Shure SM-57 is one of those simple great inventions that has never needed updating or changing. It does what it is supposed to, and when I track you'll see them on snare top and bottom as well as toms on the top (I like 421's on the tom bottoms), The Shure SM-58 is killer on bass cab, I usually have one going on an 8 X 10 with the U67 in tandem, it gives you the mids that most people never get cause they're using something whack. Keep it simple and you will be rewarded!

10. Shure SM-7
Another Shure Brother's triumph! The Shure SM-7 was designed for broadcast applications but basically rocks like hell. Inside kick, floor tom bass amp, vocal... You name it this baby does it in spades. There have been many times that the SM-7 wins the vocal mic shoot out over products that cost 10-15 times what this mic does. Just buy one and be happy! TRUST ME!