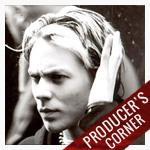 If you’ve listened to Avril Lavigne’s multi-platinum albums, you’re already familiar with the musical talent of Evan Taubenfeld. The Baltimore native was Lavigne’s musical director and lead guitarist from 2001 to 2004. He co-wrote several tracks on her last few albums, including the Gold single “Don’t Tell Me” from Under My Skin, “Hot” from The Best Damn Thing, and toured the world with her in support of her 6x-platinum debut, Let Go.

Now Taubenfeld, a multi-instrumentalist, has been writting and producing
music for such up-and-coming artists as rapper Tyga, hip-hop group The Pack, and Japanese pop group Oreskaband, In addition, he is in the process of releasing his debut solo album, With a Wink and a Smile...

“For the first time in my career, I’m not hiding behind anyone else, whether it be as a guitarist or drummer in someone else's band, or being the writer and producer,” Taubenfeld says. “I've been sitting on the sidelines waiting for this for so long. I'm like that kid on the basketball team who is pretty good but rides the bench the entire season for three years until finally, the coach is like, ‘You're in. Don't screw this up.’ So With a Wink and a Smile… is about me from the first bar to the final note. It’s Chapter One of the story of my life.”

Wanna know what Evan uses in the studio? Here is a list of some of the gear that Evan Taubenfeld couldn't live without while recording:

1. Urei 1176LN
Black face and blue stripes, both are great for different things.

3. Shure SM7
The fact that this mic is 300 dollars makes it the best ever.

4. Telefunken ELAM 251
At the other end of the spectrum, RIDICULOUS for my vocals. I wish it wasn't.