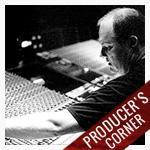 Jay Baumgardner is an award winning producer and mix engineer. Starting his music career playing keyboards, Jay got a taste for engineering and producing and found a new passion. For the last two decades, Jay has been an integral part of creating some of the greatest rock and pop music to come out of any studio.

Here is a selection of Jay's favorite gear that he has used throughout his recording career and that he now employs at NRG Recording Services: