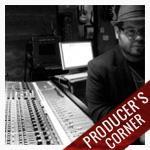 Dave Trumfio, a Chicago ex-pat turned LA resident, knew he wanted to make recording his life from the day he bought his first multi-track, a Fostex X15 4-track. Since then, he's built a reputation and career as a passionate, personable and "doing whatever it takes" kind of producer and mixer.

Currently holding court over his studio, Kingsize Soundlabs, Trumfio engineers and mixes most of the projects he works on in the studio. Some his recent projects include producing William Reid of The Jesus and Mary Chain, Built To Spill and producing/mixing Sleepy Jackson. Dave's lengthy discography also includes work with My Morning Jacket, Neco Case and the Mermaid Avenue project with Wilco and Billy Bragg.

In the 30 years since he picked up his first Fostex, Dave has amassed some amazing gear that he frequently uses on recording projects. Check out some of his favorite pieces of equipment below:

1. Inward Connections 820 EQ
These things make anything you run through them sound better.

4. SPL Transient Designer
Saved my ass on so so many mixing gigs.

8. Korby KAT4
What can I say, with four great capsules I've only once needed to use a different mic for vocals since I've owned it.

9. Barefoot MicroMain 27s
"These things are almost too good...you really hear what you got, like it or not. I love the built in sub action! I'm somewhat of a "bass-aholic" and these really keep me in check. Also, I don't need to deal with bass management & crossovers."

10. Bose Wave Radio (aux in)
This is a great reference for the new school micro stereos, iPod docks and hyped car systems, etc. It's also the same stereo my parents (and I'm sure most Joe Schmoes), own these days!!!"