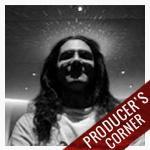 Formerly, an original member of the early '90s pop band Jellyfish (Virgin/ Charisma), Chris is a highly talented Bay Area producer, writer and multi-instrumentalist. After leaving Jellyfish, Chris signed on as an assistant engineer at the prestigious Plant Studios in Sausalito,California.

During that time, he worked under producers such as Steve Lillywhite, Bob Rock and Jerry Harrison. Chris assisted and engineered on multi-platinum and eight Grammy winning album, Supernatural by Carlos Santana. He's worked on records for Metallica, Third Eye Blind (back up vocals), Guster (bass duties) and Bouncing Souls.

In terms of his more recent work, Chris produced Thriving Ivory's self titled debut, which got the band signed to Wind Up Records (Evanescence, Creed), Also, he co-produced and mixed Chris Brown's self titled debut, which earned him the award pf "Top 10 Albums of 2006 " Chris just finished producing the debut CD for San Francisco's alt pop darlings Minipop, whose first single "LIke I Do" made it to Live 105's top 25 songs for the year. The hallmarks of his mixes are fat, punchy, warm, and transparent characteristics.

Here are ten pieces of gear that Chris Manning always uses in the studio and the reasons why he uses them the most:

1. Smart Research C1 Compresssor
My favorite stereo buss compressor, and an old standard that has endured the test of time.

3. Dangerous Music 2-Bus
I'm a big fan of analogue summing. The 2-bus brings it all into perspective without a massive console.

4. Vintage Blackface 1176
Vocals, bass, acoustic guitar... I like to use this in conjunction with a Distressor on my lead vocals.

5. Empirical Labs Distressor
A must have compressor. I haven't found anything that this doesn't work on. Thank you empirical labs for inventing the "nuke button."

6. API 2500
I love this across the drums and stereo buss. Even in bypass, the color of the circuitry adds presence and excitement to a mix.

7. Lexicon PCM 60
I love this reverb on drums. Its simple to use, fast and the eq color always seems to fit perfectly into the picture. A great bang for the buck reverb.

8. ProAc Studio 100's
A new addition to my studio, I don't know how I ever got along without these. In conjunction with NS-10's and my Mackie HR 824-s, I feel very comfortable mixing for days. However, if I had to go with one speaker, it would be the ProAC 100's.

9. Softtube Valley People Dyna-mite
A fantastic drum compressor that does a crushing job without breaking the bank.

10. Roland Re-501 "chorus echo"
I'm always using this on vocals, guitars and just for gooey cool soundscape stuff going on behind the picture. Good working ones are hard to find though.