$ 399 .00
or $12/month for 36 months 0% interest for 36 months. 36 equal monthly payments required. Learn more
PayPal Credit, Express Checkout and Pay in 4 available.
In Stock
Item is in stock and will ship the next business day. Place your order before 4:00pm ET Mon-Fri and we will ship your items the same day. 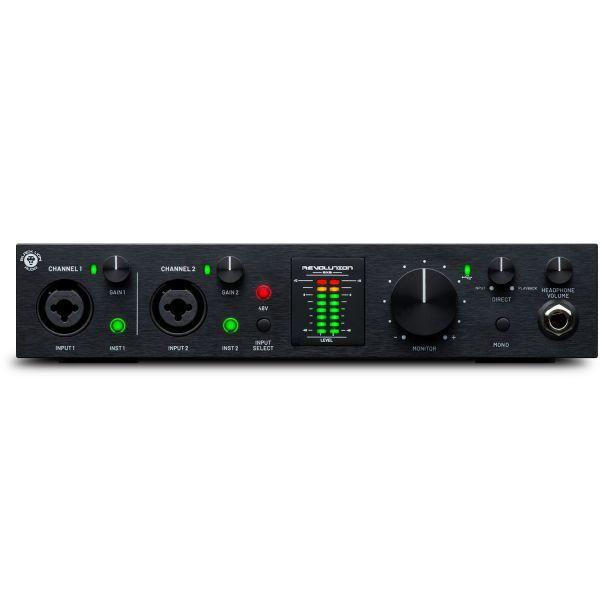 Black Lion Audio have been revered as the “king of audio mods” for years, and have modded countless recording interfaces over the years. But since the very beginning, they have been asked when they would create their own interface. So, they planned, engineered, and worked — all in secret, for years. It took an impressive amount of design to revolutionize bus-powered, studio-grade interfaces. Now comes the Black Lion Audio Revolution 2x2: the ultimate in portable recording interfaces. Revolution isn’t another run-of-the-mill interface from big brother — it’s the interface the world has always asked for.

The most revolutionary thing to note about Revolution 2x2 is it’s sound quality: the sound of large, high-end converters that cost thousands of dollars is now available in a product that can fit in your hand — and not break the bank. Revolution uses new “Macro-MMC” Clocking technology, which is based off Black Lion Audio's numerous clocking products and modifications. Macro-MMC’s circuit implementation brings converters to new heights; well beyond what’s been seen in other recording interfaces. Black Lion Audio also assembled their finest AD/DA technology, giving you the record-making power you’ve never had before in an interface this small, portable, and affordable.

Hi-fi digital design alone isn’t enough to cut it — it takes a serious analog circuit for the very best capture and playback. Revolution 2x2 is built with the most cutting edge, high-end ICs. High-end Vishay, Nichicon, and Wima capacitors are used throughout the entire circuit. All internal gain-staging has been optimized for the very best signal-to-noise ratio. All of the analog I/O has not only been built with the finest components, but are fully decoupled and balanced — right to the very core of the convertor! Most manufacturers do not follow this practice, and that allows extra noise contamination during both capture and playback.

Revolution also employs “PG-i” technology internally, based off of Black Lion Audio’s experience in engineering their “best-of-class” power conditioners. All power rails are highly filtered in every active stage across Revolution 2x2 — something that isn’t even found in the most well-respected, high-end equipment. Power is decoupled across the entire circuit: the preamplifiers, the convertors, the internal power, and even the clock. This majorly helps reduce noise contamination from other equipment that is plugged into Revolution 2x2.

Please fill out the form below and a Vintage King Audio Consultant will contact you with a ship date for the Black Lion Audio Revolution 2x2 USB-C Interface.

Have a better price in mind for the Black Lion Audio Revolution 2x2 USB-C Interface that you've been checking out? We're willing to work on it!Please fill out the form below with your contact information.Once the form is submitted, a Vintage King Audio Consultant will contact you as soon as possible with our best price on this product.