$ 2,795 .00
No interest if paid in full within 12 months Learn more
PayPal Credit, Express Checkout and Pay in 4 available.
Ships directly from Benchmark
Note: This item may not be returnable or could require a restocking fee. Contact one of our Audio Consultants for more details. This item ships directly to you from the manufacturer. To ensure that the manufacturer currently has stock, please chat, call or email for the latest availability status. 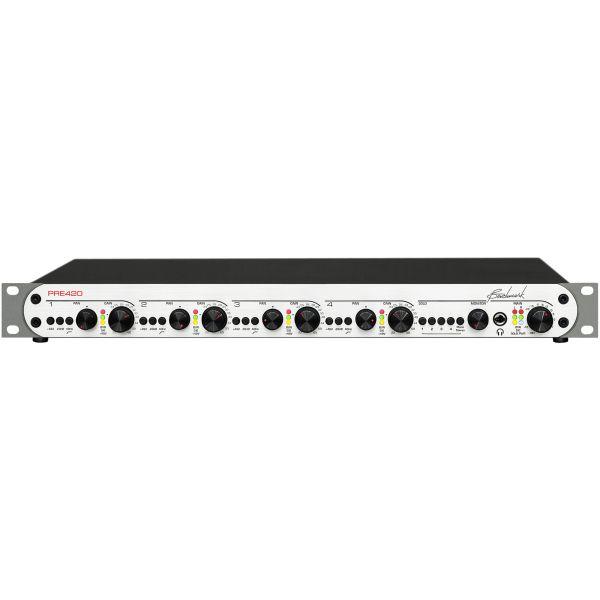 The Benchmark PRE420 is a remarkable four-channel microphone preamplifier with an integrated stereo mix bus and stereo/mono solo bus in a sleek, 1u chassis.  The PRE420 is designed for maximum transparency, wide bandwidth, low-noise, low-distortion, and superior RF immunity.  It is well suited for the most demanding applications in studios and live venues.

Unlike harmonic distortion (THD), IMD produces distortion tones that are very un-natural and non-musical.  IMD also masks and alters the subtle details of delicate high-frequency transients such as those produced by bells.  Benchmark MPS series preamps have always had outstanding high-frequency performance as well as freedom from IMD.  The PRE420 takes the Benchmark design one step further, and achieves the lowest IMD that we have ever measured in any microphone preamplifier - the innovative circuitry provides ultra-low distortion over a 500kHz bandwidth while maintaining RF-immunity in the most demanding environments.

The PRE420 is equipped with Benchmark's exclusive CMF1™™ RF-filter
The CMF1™ has been extensively tested and proven in Benchmark's MPS mic-pre series by experienced studio and remote recording engineers in heavy RF fields - such as venues in close proximity to broadcast antennas.  This RF-immunity is coupled with ultra-low distortion performance at high-frequencies beyond the reach of most mic-pres, giving your audio remarkable realism.  With amazingly low THD+N of 0.00024% (see specs), we welcome you to compare the PRE420's performance specifications with any other mic pre available.

Each of the four channels has an independent direct XLR output, a variable intensity signal level meter and peak-warning indicator*, and MirrorPan™ control.  Each channel features a precisely matched 41-position first-stage gain control factory preset to a maximium gain of 60dB (internally adjustable up to 70dB for special applications).

Microphone Inputs
Each of the PRE420's four microphone inputs includes switches for +48V Phantom power, a 20dB pad, and a 40Hz high-pass filter.

The PRE420 achieves outstanding performance over a wide range of input levels.  Gain is controlled by matched 41-detent pots and is adjustable over a range of 22dB to 60dB (without pad), or 2dB to 40dB (with pad enabled).  The mix bus can provide an additional gain of up to 6 dB.

Ugged Yet Elegant Chassis
A ugged 1u enclosure includes an internal power supply that supports all international voltages and has generous margins for over-voltage and under-voltage conditions.  It features a core-banded toroidal transformer in a shielded enclosure.

Please fill out the form below and a Vintage King Audio Consultant will contact you with a ship date for the Benchmark PRE420 4-Channel Microphone Preamp.

Have a better price in mind for the Benchmark PRE420 4-Channel Microphone Preamp that you've been checking out? We're willing to work on it!Please fill out the form below with your contact information.Once the form is submitted, a Vintage King Audio Consultant will contact you as soon as possible with our best price on this product.