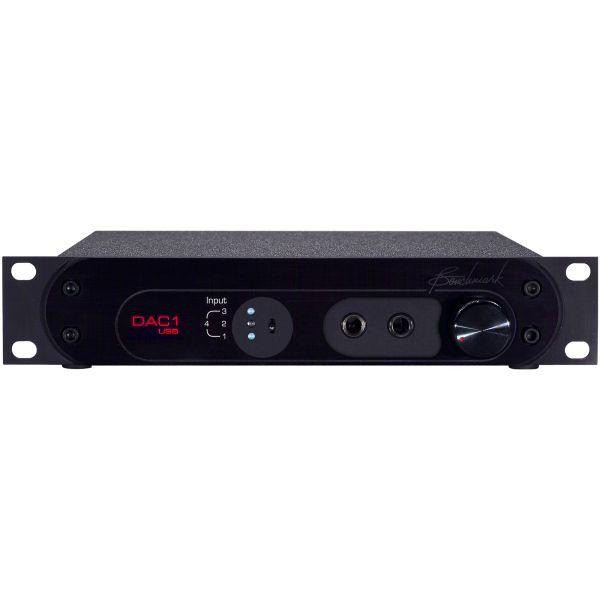 Engage the Music with the DAC1 and DAC1 USB
The DAC1 USB is a mastering-quality, two-channel 96 kHz 24-bit digital-to-analog audio converter. For more then 10 years, engineers and audiophiles have come to rely on Benchmark for critical digital audio conversion. They consistently find themselves engaged in the music in a way that is rarely achieved with digital converters.

The DAC1 and DAC1 USB both include Benchmark's jitter-immune UltraLock™ clock system and Benchmark's 0-ohm HPA2™ headphone amplifier. The DAC1 USB features Benchmarks AdvancedUSB technology to ensure bit-transparent, high-resolution playback directly from your computer. The DAC1 USB also includes a programmable mute function that automatically mutes the main outputs upon insertion of a headphone plug. Other features that are exclusive to the DAC1 USB include a programmable headphone gain range, an automatic 'Standby' feature, and a high-current output stage designed to drive even the most difficult loads.

Jitter-Immune UltraLock™
Digital interconnect cables, electro-magnetic interference, and many other variables introduce jitter into the digital audio. Jitter presents a major problem to most D-to-A converters. Jitter is a type of clock error that, if not properly addressed, can cause the D-to-A to misfire. The result of these misfires is a non-musical, digital distortion.

Many modern (and expensive) converters suffer from severe jitter-induced distortion. Jitter is NOT a problem for the DAC1 and DAC1 USB, which achieve jitter immunity by utilizing the proprietary UltraLock™ clock-recovery system.

With the UltraLock™ clock-recovery system, the digital-to-analog conversion-clock in the DAC1 and DAC1 USB is totally isolated from the clock of the digital audio input. This clock-recovery topology outperforms even the most well-designed two-stage PLL designs. Using state-of-the-art Audio Precision testing equipment, no jitter-induced artifacts can be detected with the DAC1 or the DAC1 USB. Any signal that can be decoded by the USB or AES/EBU receivers will be reproduced without the addition of any measurable jitter artifacts. The bottom line is this: Benchmark converters will consistently and faithfully deliver truthful audio with no jitter-induced artifacts, no matter what variables are present.

AdvancedUSB Audio Technology
The USB interface of the DAC1 USB features Benchmark's unique AdvancedUSB technology. This USB interface is completely bit-transparent. In other words, every sample of digital audio is transferred from the computer to the DAC1 USB without modification. The DAC1 USB is natively compatible with Windows 7/Vista/XP/2000 and Mac OS X. As a native device, there are no drivers or other invasive software required to install or configure. The DAC1 USB is a true plug-and-play DAC USB, and is designed to begin playback immediately after the unit is connected to a USB port for the first time.

Unlike previous native USB audio interfaces, Benchmark's AdvancedUSB Audio technology supports 24-bit audio at sample-rates up to 96 kHz. It is very important to have a 24-bit USB path, even for 16-bit playback, because certain computer-related functions can increase 16-bit audio to 24 bits. If a 16-bit USB DAC is used, 8 bits of every digital audio sample would be truncated. Truncating digital audio causes severe, non-musical digital distortion. Benchmark's AdvancedUSB interface ensures a full 24-bit digital audio path to avoid truncation distortion.
HPA2™ Headphone Amplifier
The DAC1 and DAC1 USB feature the HPA2™ - Benchmark's signature high-current, 0-Ohm headphone amplifier. The HPA2™ is arguably the ultimate reference headphone amplifier. It will deliver the full rated performance of the DAC1 and DAC1 USB to the headphones. The HPA2™ maintains less than 0.0003% THD+N under full load. The DAC1 and the DAC1 USB both have two 1/4" headphone jacks on the front panel. The performance of the HPA2™ remains consistent even when two headphones are being driven simultaneously.

Please fill out the form below and a Vintage King Audio Consultant will contact you with a ship date for the Benchmark DAC1 USB Black Rackmount.

Have a better price in mind for the Benchmark DAC1 USB Black Rackmount that you've been checking out? We're willing to work on it!Please fill out the form below with your contact information.Once the form is submitted, a Vintage King Audio Consultant will contact you as soon as possible with our best price on this product.