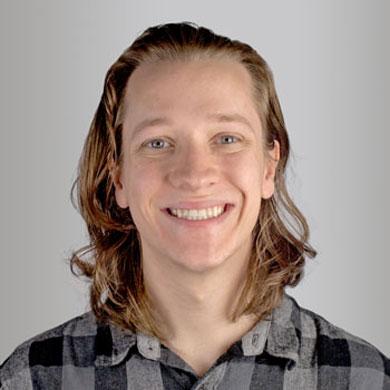 Gerald Leonard was introduced to music through the world of theatre, ballet, and singer-songwriters like Cat Stevens and Neil Young. But it wasn't until his older brother introduced him to classic rock at 11 years old that Gerald would find his calling. After teaching himself to play guitar, Gerald joined a band and began honing his craft as a songwriter.

Writing led to recording, and Gerald quickly went from cutting records in his parents' basement on a four-track Tascam to studying audio engineering at Indiana University's Jacobs School of Music. It was during his time at Indiana University that Gerald discovered and developed his interest in recording equipment, like his go-to compressor, the Empirical Labs Distressor.

A fan of artists such as The Strokes, Culture Abuse, Wolf Alice, Turnstile and Green Day, Gerald is a self-proclaimed "sucker for big guitar riffs." In the studio, he tries to cultivate an environment where artists can feel inspired and be free to collaborate and create memorable moments.

When working with Vintage King clients, Gerald asks himself, "What is the purpose of this music and what can I do to help it be the best version of itself?" As someone who truly appreciates artistic vision, Gerald is happy to help you find the gear you need to make the music that you love.

What is the most inspiring part of the recording process, for you?
The most exciting moment I think happens in the mixing stage when everything finally gels the way it should. I try to make sure everything sounds as good as possible on its way in, but I always have a vision for what it should eventually sound like after a mix, and once the mix gets to that point, that's the "Hell Yeah" moment that I think is the most fun part of the whole process.

What piece of gear changed how people work the most?
Tough question, but I'd have to say the advent of stereo mixing was biggest evolution in how listeners perceive music, and therefore was the biggest change in how engineers approached mixing the final product. It changed the way we record for sure, but I think more importantly it changed the way we think about music. It feels like that was the moment the audio world went from black and white to color.

What record do you point to as an example of perfect music production? Why?
Passive Me, Aggressive You by The Naked and Famous. While I don't think it's necessarily the best music ever written or the best production or anything (it was made in New Zealand by some college dropouts in a basement), this record represents everything I aspire my production to be. Front to back, the record has a hyper-focused theme of dichotomy. It's all about juxtaposing two disparate elements, analog vs. digital, male vs. female, apathy vs. inspiration, frustration vs. bliss, etc. It's not that this is a remarkable concept for an album, what I admire is how committed to that concept this album is on every level. From the lyrics to the production to the performance to the album art, this record has a very clear goal and it executes with every song. Plus it's got some bonafide bangers on it.