$ 99 .00
Your Savings: $ 100 .00 Msrp: $ 199 .00
No interest if paid in full within 12 months Learn more
In Stock - Fastest eDelivery 24/7!
This product is delivered by download. Once your order is complete, you will receive a license code via email within minutes. Note: Software is not returnable, so please call if you need advice about compatibility or version.

Plug-in recreation of the Trident preamp, one of the most prized, rare, and exclusive channel strips ever made
MFR# 1090-55
Shop All Arturia
Skip to the end of the images gallery 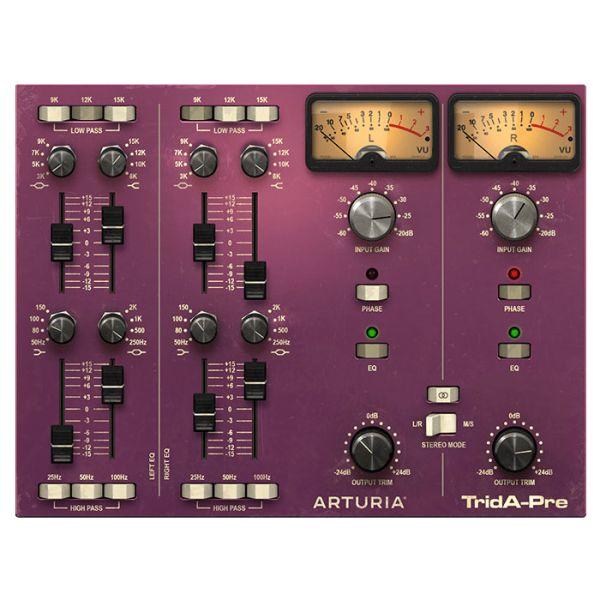 At the heart of the studio’s sound was the Trident A Range console. It became so well known for its gorgeous, musical EQ and the full, rich tone it imparted soon, studios around the world were placing orders for an A Range of their own. Although only 13 were ever made, they created a legacy that continues to this day. Now, thanks to Arturia’s groundbreaking True Analog Emulation technology, you too can experience the incredible sound-shaping power of the legendary Trident A Range preamp and EQ with the Arturia TridA-Pre.

The best of both worlds

In the digital age, the preamps included on audio interfaces tend to be highly transparent, amplifying the signal without adding “color”, a sort of tonal flavor that subtly changes the sound.

In the 60s and 70s, a period many consider to be the “golden age” of the recording studio, the preamps within their bespoke mixing consoles - like the Trident A range - were pioneering technology. Mix engineers found that, due to their analog components, the preamps would add a certain character to the audio, which gave each desk, and consequently each studio, a particular “sound”. As engineers became experts with these consoles, they would use the preamps as part of their creative process; pushing them hard to create harmonically rich analog distortion, for example.

Now, thanks to the digital audio revolution and the power of modern computers, you can enjoy the best of both worlds. The Arturia TridA-Pre lets you add the iconic tone of the elite, rare, virtually unobtainable preamps found in the studios that created some of the biggest hits of all time.

The channel strips found in the Trident A Range consoles are considered to be gold dust, available only to the finest producers and engineers at the peak of their careers.

Arturia have built their reputation by recreating history’s best, most coveted keyboards and synths as software instruments. What better way to carry on this legacy than by bringing the most sought-after studio hardware right to your DAW? Although it would have been quite simple to just create a plug-in that sounded similar to the famous Trident A Range channel strip, Arturia didn’t want to give you an approximation of the sound. They wanted to create a virtual replica of the hardware so you could enjoy all the subtle nuances that made the original the go-to choice for the biggest producers and engineers of the last 50 years.

Finding a Trident A Range console was no simple feat - only 13 were ever created, after all - and their search led Arturia to Denmark’s capital city, Copenhagen, and to Sweet Silence North. The musical residence of Grammy award-winning producer Flemming Rasmussen, whose critically acclaimed work with metal acts like Metallica, Morbid Angel, Blind Guardian, and Ensiferum hinged on the use of his Trident A Range console. To create TridA-Pre, Arturia analyzed channel 3 of his 1976 mixing console, creating a sophisticated model, right down to the level of individual components.

Through the passion and skill of their developers, Arturia are able to bring you the elusive ‘secret ingredient’ behind so many incredible hits as a software plug-in. It’s official: we are living in the future.

Please fill out the form below and a Vintage King Audio Consultant will contact you with a ship date for the Arturia TridA-Pre - Electronic Delivery.

Have a better price in mind for the Arturia TridA-Pre - Electronic Delivery that you've been checking out? We're willing to work on it!Please fill out the form below with your contact information.Once the form is submitted, a Vintage King Audio Consultant will contact you as soon as possible with our best price on this product.