Faithfully recreates the elite digital synthesizer/workstation that started it all, powering some of the biggest hits and film soundtracks of the early ‘80s with its unique rich, edgy sounds
MFR# 1090-41
Shop All Arturia
Skip to the end of the images gallery 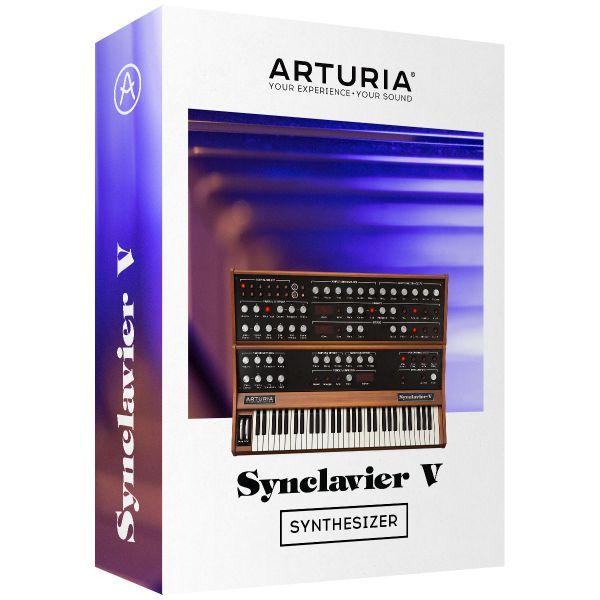 The Arturia Synclavier V faithfully recreates the elite digital synthesizer/workstation that started it all, powering some of the biggest hits and film soundtracks of the early ‘80s with its unique rich, edgy sounds.

If you were to ask anyone back in the late ‘70s and early ‘80s to name the Holy Grail of synthesizers, the most revered of them all was New England Digital’s Synclavier. Its unique combination of additive synthesis and frequency modulation delivered a creative edge to the privileged few keyboardists, producers, film composers and sound designers who could afford systems that ranged from $13k to $400k.

Some of those rock-solid systems are still in use today. Arturia has recreated this highly revered hit maker in partnership with original programmer Cameron Jones, delivering the immense rich textures and creative palette of this vintage instrument, while dramatically improving it to let you blaze new musical trails today with sounds never heard before.

Sounds you will only find here

There’s simply nothing else like the powerhouse sound of the Synclavier V. No synth arsenal is complete without it. There’s no hint of analog or samples here—this is the sound of unabashed digital synthesis in all its glory. While it can certainly create unique mellow tones, this vintage flagship is more known for its distinctive digital character ranging from edgy to eardrum-ripping brash to intergalactic. It’s especially ideal for extended pads and slow cinematic, ambient soundscapes. Plus, we’ve invested in significant updates that make the Synclavier V a thoroughly modern instrument with sounds that set it—and you—completely apart.

Hundreds of presets from the world’s top sound designers tame the unparalleled power of the Synclavier V and place it at all your fingertips for instant inspiration and easy customization.

While you’ll get tons of love from Synclavier V’s presets alone, there’s a universe of sonic adventures waiting just beneath the surface whenever you’re ready. The unique sound of the Synclavier V comes from its blend of additive and FM synthesis, with control over 24 additive harmonics on both the carrier and modulation oscillators. Where the original instrument let you mix four uniquely programmed Partials Timbres in a Timbre preset, Arturia’s recreation has twelve, boosting your creative possibilities exponentially. The Time Slice engine allows complex evolutions of the sound over time—even several minutes if you want.

Programming the Synclavier V is a study in elegance. Three different interface views let you choose the depth of control that best suits your needs.

The Synclavier V lets you realize the dream of an entire stunning synth orchestra with just one plugin.

Please fill out the form below and a Vintage King Audio Consultant will contact you with a ship date for the Arturia Synclavier V Synthesizer - Electronic Delivery.

Have a better price in mind for the Arturia Synclavier V Synthesizer - Electronic Delivery that you've been checking out? We're willing to work on it!Please fill out the form below with your contact information.Once the form is submitted, a Vintage King Audio Consultant will contact you as soon as possible with our best price on this product.