Actual authentic modeling of both Stage and Suitcase versions of the most popular electric piano on the planet —completed with unparalleled control of virtual mechanics, a complement of effects pedals, and built-in classic amps
MFR# 1090-44
Shop All Arturia
Skip to the end of the images gallery 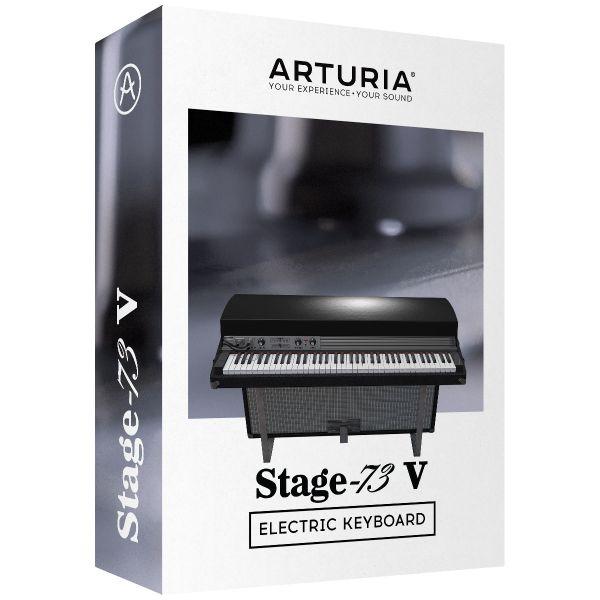 The Arturia Stage-73 V gives you actual authentic modeling of both Stage and Suitcase versions of the most popular electric piano on the planet —completed with unparalleled control of virtual mechanics, a complement of effects pedals, and built-in classic amps.

The Stage-73 uses Arturia's award-winning modeling technology to faithfully reproduce the tine-based sound and playing experience of the most loved electric pianos of all time. Arturia modeled both the Fender Rhodes Suitcase Piano and Stage Piano—including separate 1973 and 1974 models of the Stage in order to capture the difference in their components. We’re talking total sonic and aesthetic fidelity to the originals. You can even easily pop the top and customize the various mechanical components to make your instrument unique. Classic amps and an array of effect pedals round out the virtual electric piano you’ve always dreamed of having.

A sound that’s always in style

Whether you’re playing yesterday’s hits or making tomorrow’s, the sound of the Stage-73 is a true player in its own right. The venerable sound of the Fender Rhodes simply refuses to go out of style. These instruments were used by a who’s who of keyboardists who pioneered mid-century jazz, funk, R&B and rock. With a tonal range spanning smooth bell-like qualities to an aggressive bark depending upon how hard they’re played, these seminal keyboards have been in continual use across just about every style imaginable right through to today.

The Stage-73 V brings you all the signature sounds that propelled the instruments and their players into the spotlight and onto the charts.

There’s nothing quite like playing a Rhodes… except playing the Stage-73 V. There have been a lot of attempts to emulate the Fender Rhodes. You already know that most software, and even hardware, based on samples falls well short of the mark. That’s what inspired Arturia to instead apply their critically acclaimed modeled technology to the whole system—including the tines (metal tone rods), the hammers that strike them, the pickups that generate the electromagnetic current, and the circuits that amplify it all. The sum total is a totally authentic homage that stands on its own.

Once you’ve played the Stage-73 V, you won’t settle for anything less.

The Stage-73 V gives you access to the controls of the original instruments—plus many adjustments you’ve never been able to get your hands on before. For starters, a simple click switches up the entire instrument between the distinct sounds of a Suitcase, a ’73 Stage or a ’74 Stage. Open the top and you’re in control of parameters like dynamics, hammer hardness, tone bar resonance and lots more—some that would take a tech a zillion hours to mod in hardware and some that simply aren’t possible in the physical world. You also get the built-in amp and speaker in Suitcase mode, and the option of running direct or through a classic amp model in Stage mode. Next to the sustain pedal is a complete set of stomp boxes to dial in just the effects you’re looking for—all saved right with your presets.

Whether you just want to rock the designer presets or get busy with mods of your own, the Stage-73 V has the flexibility to be just about any electric piano you want it to be.

Please fill out the form below and a Vintage King Audio Consultant will contact you with a ship date for the Arturia Stage-73 V Electric Piano - Electronic Delivery.

Have a better price in mind for the Arturia Stage-73 V Electric Piano - Electronic Delivery that you've been checking out? We're willing to work on it!Please fill out the form below with your contact information.Once the form is submitted, a Vintage King Audio Consultant will contact you as soon as possible with our best price on this product.