$ 199 .00
No interest if paid in full within 18 months Learn more
In Stock - Fastest eDelivery 24/7!
This product is delivered by download. Once your order is complete, you will receive a license code via email within minutes. Note: Software is not returnable, so please call if you need advice about compatibility or version.

Digital wavemaker synthesizer plug-in with 16-voice polyphony and True Analog Emulation Technology plus 3 digital oscillators based on the original DOC chip, over 400 waveforms across 4 unique banks, and Amplitude Modulation and Hard Sync 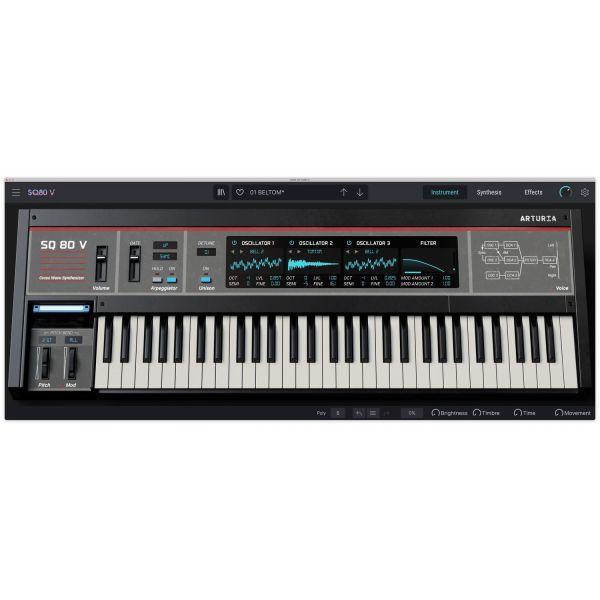 Where digital dreams are made

Digital synthesizers are often known for sounds that are razor-sharp, crystal-clear, and precise - SQ80 V has other ideas. Explore a detailed software resurrection of a digital anti-hero that’s out to break the rules. Capture the grit, character, and charming imperfection favored by John Carpenter, Adamski, Mr Bungle, and countless others with an instrument that’s simultaneously complex and accessible, focused and intricate, edgy and dream-like - and unlike anything you’ve heard before.

Digital oscillators collide with an emulated analog filter and output circuit for sinewaves that growl, harmonics that sizzle, and warm lo-fi timbres that are perfectly imperfect.

Digital synths have long been notoriously tricky to program, both hardware and software. SQ80 V bucks the trend with an immersive digital architecture that can be tweaked instantly, hassle-free.

Created by the same engineers responsible for the Commodore 64 - considered the best-selling computer of all time - Ensoniq’s SQ80 was up against stiff competition. At the time of its release, the digitization of hardware synthesizers was well under way - but it went on to become a cult classic.

Here was a digital synthesizer that offered a degree of warmth and character usually reserved for its analog peers; flexible voice and modulation controls that didn’t require 10,000 hours of practice to program; a workhorse keyboard that produced an unprecedented array of timbres to suit any style, without the stellar price tag of similarly capable instruments.

SQ80 V’s unique voice is all about combining and manipulating waveforms. Each of its 3 oscillators can be assigned a different waveform; SQ80 V unites classic waveforms from the original built-in library with hundreds more that we’ve added, ranging from the familiar to the abstract. The resulting range of sounds at your disposal is simply enormous; soft moving string pads, plucky pulse width basses, glitchy industrial percussion...

SQ80 V’s unique voice begins with its 8-bit oscillators and endless hybrid waveform combinations. It’s when these components collide with its emulated CEM 3379 analog filter that it truly comes into its own. By processing digital sounds through its emulated analog filter and amp, SQ80 V can inject organic imperfections, crunchy harmonics, and tangible lo-fi distortion into your modern mixes.

From the immediacy of its controls to its games console aesthetic, SQ80 V is as charming, edgy, and accessible as the real deal. Use it in your DAW or as a standalone instrument and, quite literally, make waves.

The main interface is stripped down, as with the original, with a mini display menu providing instant access to your main voice controls, including tuning, waveform selection, octave switching, and more.

In the Synthesis tab, you’ll find more detailed controls for SQ80 V’s 3 oscillators, each with a dedicated DCA (amplifier) and hundreds of waveforms to choose from. This simple architecture is comparable to classic analog synths, making it ultra-accessible despite its complex sound. And, just like the original, you can explore unique hard sync and AM (amplitude modulation) configurations to unlock more abstract sonic behavior.

Getting SQ80 V mix-ready is as easy as hopping over to the Effects tab. A familiar but powerful array of 15 effects add the final piece to its end-to-end sound design puzzle. From modulation to dynamics, configure the effects section in series or parallel to refine your patch into a finished product.

SQ80 V strikes the perfect balance between '80s cult classic and modern production workhorse with character. To achieve this, Arturia added hundreds more waveforms and retrofitted its architecture with a number of extra creative features - without compromising its distinct retro charm.

Introducing an arpeggiator to SQ80 V’s curious sound equips it for easy performance and melody creation. A classic component with the familiar controls, including arp direction, sync, octave range, and hold. Just turn it on and enjoy free-flowing lo-fi sounds that fit right into your mix.

Enjoy perfect tailor-made sounds from the offset with SQ80 V’s expertly-designed library of 160 presets, including 40 replicated from the original instrument. From metallic industrial percussion to synthetic keyboard patches, you’ll find a sound that suits you in no time.

Please fill out the form below and a Vintage King Audio Consultant will contact you with a ship date for the Arturia SQ-80 V Digital Wavemaker Synthesizer Instrument - Electronic Delivery.

Have a better price in mind for the Arturia SQ-80 V Digital Wavemaker Synthesizer Instrument - Electronic Delivery that you've been checking out? We're willing to work on it!Please fill out the form below with your contact information.Once the form is submitted, a Vintage King Audio Consultant will contact you as soon as possible with our best price on this product.