The most authentic tonewheel organ and rotary speaker experience you’ll find anywhere, plus customizations that open up new creative opportunities
MFR# 1090-43
Shop All Arturia
Skip to the end of the images gallery 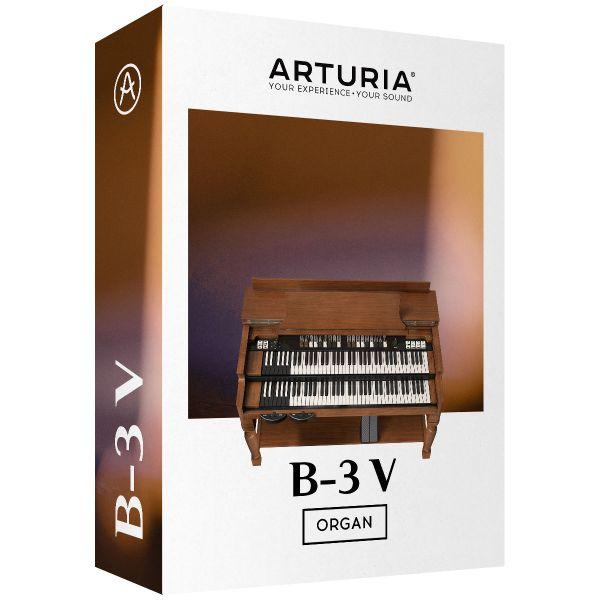 Monarch of electronic organs, the rich sounding B3 has been a staple of jazz, gospel, rock, reggae and R&B—not to mention pro studios everywhere—for over a half century. Its electromagnetic tonewheel design gave it a beefy quality not found on later transistor organs. The Arturia B-3 V Organ includes an authentic rotary speaker and an array of stomp boxes, plus inspiring updates like analog circuit mods and drawbar modulation for new animated and syncopated effects.

No other organ captured the hearts of keyboardists, spanning so many genres and years. It had the subtlety for jazz at the hands of artists like Jimmy Smith, Joey Defrancesco and John Medeski. It had the grace for gospel, as demonstrated by Elbernita “Twinkie” Clark and Cory Henry. It had the energy to drive the reggae behind the likes of Bob Marley and Jimmy Cliff, and the soul of James Brown and Sly Stone. Most visibly, it had the raw power to hold its own in a rock world as diverse as ELP, Santana, Yes, Pink Floyd, Deep Purple, The Allman Brothers, and Blood, Sweet and Tears.

Whether you’re playing solo, in a group, or in a mix, Arturia’s B-3 V lets you cover the organ parts for any genre using the sound and feel of the real thing.

There are organs and there are B3s. Then there are B3 emulations and Arturia’s B-3 V. Where most other attempts are based on samples that only capture some of the qualities, Arturia created the B-3V using the same critically acclaimed modeling technology that distinguishes the entire V Collection of classic instruments. The put that same attention to detail into the included rotary speaker as well.

Even better with age

Rotary speakers have become an essential part of the tonewheel organ sound, so we’ve naturally included one. Why stop there? We’ve added lots of other options including multiple reverbs, an array of effects pedals, and even the ability to modify previously fixed analog circuit features like key click. The most radical enhancement is the addition of a modulation section to automate the movement of drawbars using envelopes, LFOs and step sequencers, letting you infuse your music with new animated textures.

Please fill out the form below and a Vintage King Audio Consultant will contact you with a ship date for the Arturia B-3 V Organ - Electronic Delivery.

Have a better price in mind for the Arturia B-3 V Organ - Electronic Delivery that you've been checking out? We're willing to work on it!Please fill out the form below with your contact information.Once the form is submitted, a Vintage King Audio Consultant will contact you as soon as possible with our best price on this product.