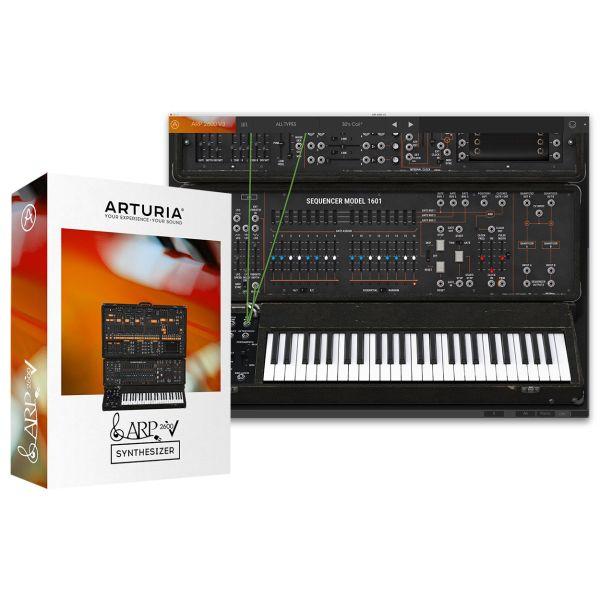 With its sound palette varying from heavy drum n' bass stabs to angular arpeggiated electro bass lines, whatever your chosen genre, the Arturia ARP 2600 V3 is a truly versatile sound creation tool which still takes its place at the heart of today's music. A unique combination of semi-modular architecture and fixed preset routing, gave the original ARP2600 the distinction of being one of the most versatile synths of the 1970s.

Going beyond and back

While the original instrument was a wonder to use, Arturia have always found ways to innovate and improve. Four revolutionary modulation generators add sonic flexibility and the step sequencer will allow you to animate your sounds. The multimode filter and output audio effects add new possibilities not found in the original....and, it is fully polyphonic.

A little bit of history...

Alan R. Pearlman, whose initials would later form the name of his synthesizer company, became convinced of the potential for electronic devices to be used as musical instruments as early as 1948, when he was a student at the Worcester Polytechnic Institute. This was a means for him to associate his two passions: electronic music and the piano.

In 1969, he created ARP Instruments (originally called Tonus Inc.) with David Friend and Lewis G. Pollock. The Massachusetts-based company designed electronic products, but most importantly they designed and built a large modular synthesizer, the ARP 2500. The machine used a matrix to connect the different sections of the synthesizer instead of the traditional patch cables found in the competitor's modulars. The ARP 2500 found success in American universities.

The growth of ARP instruments was fast and in 1972 the ARP 2600, probably the most legendary of the entire range, was unveiled. This semi-modular synthesizer, conceived with an educational goal, was to become hugely successful after a shaky start. The ARP 2600 was notably used by Stevie Wonder, Joe Zawinul (Weather Report), Tony Banks (Genesis), Jean-Michel Jarre, and Herbie Hancock, to name a few artists. ARP was the market leader in synthesizers during the 70’s with around 40% of the market share.

In ten years, three versions of the ARP 2600 were commercialized: The first version was called “Blue Meanie” because of its steely blue finish. The “Blue Meanie” was quickly replaced by a second version, with a grey background finish and white silk screening (1972). This was to be more popular. In 1978 ARP decided to change the graphic chart for all of its machines: a black background color with orange silk screening was introduced. The third and final version of the ARP2600 was the most popular of all.

With ARP 2600 V Arturia brings this powerful analog synthesizer back to life. All of the original functions and signature sound are there, not to mention MIDI control, polyphony, and the ability to create, save and recall presets. But that’s not all: the speaker panels hide innovative features that take the initial design of the ARP 2600 to a new level. Four revolutionary tracking generators add sonic flexibility that is highly advanced. Modern effects devices are also available, along with the original ARP sequencer. The combination of old and new features forms an exciting new virtual synthesizer.

If you’re new to synthesis, no problem: Arturia have included hundreds of excellent presets to get you started. The Arp 2600 is a workhorse that can deliver everything from clean leads and sequences to crazy sound effects. When you need something with that extra special character the Arp 2600 is the one to go for.

Please fill out the form below and a Vintage King Audio Consultant will contact you with a ship date for the Arturia ARP 2600 V3 - Electronic Delivery.

Have a better price in mind for the Arturia ARP 2600 V3 - Electronic Delivery that you've been checking out? We're willing to work on it!Please fill out the form below with your contact information.Once the form is submitted, a Vintage King Audio Consultant will contact you as soon as possible with our best price on this product.

VIEW
64497
I would like to thank VK for the wonderful sales assistance, service and prices. This was my first purchase with you and it won't be my last. I only wish I'd discovered you years ago!
Matthew R.
I had two Grammy wins this year - Ray LaMontagne & Carolina Chocolate Drops. Both made with help from Vintage King!
Ryan F.
In almost 20 years in Pro audio buying, never did I receive a unit so well packed and exactly as described. Works flawlessly. The whole process has been so smooth. I will never hesitate to do business with you guys in the future and will recommend you to everyone I know.
Martin C.
This was my first experience buying something from Vintage King (although I surf the "used" categories on the website frequently!), and, despite being on the other side of the world, I had absolutely no trouble and everything went very smoothly.
Phil T.
The speed of delivery exceeded my expectations! I was VERY pleased that my shipment arrived in time for a scheduled vocal tracking session. The packing insured that my order arrived safely. And the sales staff responded quickly to questions regarding the product.
James P.
Thank you so much! Vintage King has been so fair and easy to work with. I can't thank you enough. It feels good to trust such a hefty purchase to folks who are so helpful and knowledgeable. Vintage King is a sound designers dream store.
Noa L.
You guys have excellent customer service and I am excited about the next upgrade I complete on my fifth recording facility. I've been in the studio business for forty plus years. The salesman I worked with at Vintage King was the best of the best. You all rock!
Robby T.
I would recommend Vintage King to any one looking for top-class gear, unbeatable customer service and the best prices on the map!
Jake D.
My experience with Vintage King was excellent. The order was here fast considering it was out of stock. The sales person had SKB send it to me directly and I couldn't have been more pleased.
Michael D.
From the minute I placed my order I was kept well-informed through each step in your process. Even though I was buying a comparatively modest piece of gear, your attention to detail made me feel like I was purchasing a six-figure mixing desk.
Thomas W.
I am a new customer of yours. You guys provided me the absolute best deals in ordering all the equipment to power my brand new recording studio. Your customer service is amazing and i will always deal with you from here on out.
Rob M.
Thanks for your great service and getting this out today. You guys really are the Kings!
Alan B.
Better than expected! Truly impeccable service. Your team was professional, knowledgeable, provided speedy delivery above and beyond standard. Vintage King Audio is definitely my go to for all of my audio and information needs.
James O.