$ 99 .00
Your Savings: $ 100 .00 Msrp: $ 199 .00
No interest if paid in full within 12 months Learn more
In Stock - Fastest eDelivery 24/7!
This product is delivered by download. Once your order is complete, you will receive a license code via email within minutes. Note: Software is not returnable, so please call if you need advice about compatibility or version.

The iconic vintage sound of the 1073 preamp, perfectly recreated for the modern producer
MFR# 1090-54
Shop All Arturia
Skip to the end of the images gallery 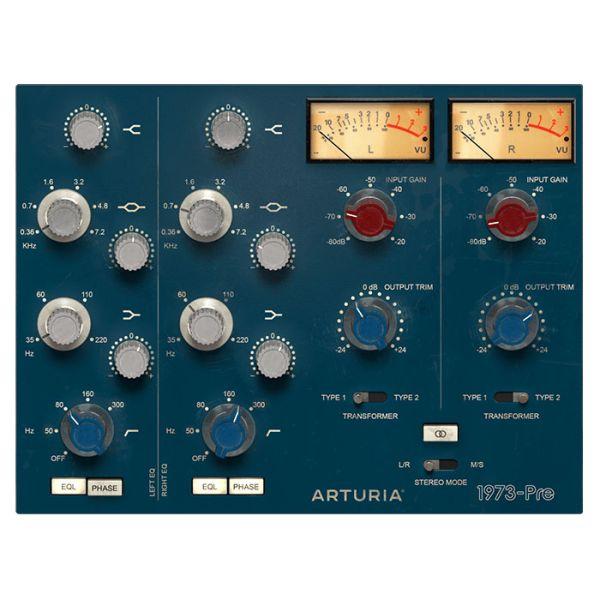 For years, top producers have coveted the sound of the venerable 1073 preamp. Now - through the power of Arturia’s advanced TAE modelling - you too can have a taste of that harmonically rich, classic tone in your DAW with the Arturia 1973 Preamp.

Devised by visionary electronics engineer and pro audio legend Rupert Neve, the preamp became a staple of the world’s top studios, and added its unique tonal flavor to countless hits. It was a revolution in 1970, pioneering the use of reliable high-efficiency transistors to replace the temperamental vacuum tube technology of the time. The sound of the preamp became an instant hit with record producers, sound engineers, and artists the world over, cementing its place in music history.

Continuing that revolution, using their exclusive TAE technology, Arturia have recreated this phenomenal piece of music production history. Capturing and recreating its distinct musical color, its pleasing analog distortion, and its sweet-sounding tone controls, you’ll be able to start your virtual signal chain with one of the best sounding pres ever created.

Analog sound in the digital world

As you’ll know, preamps raise the gain of incoming signals - from microphones and musical instruments - to usable levels, which can then be mixed. Practically all modern audio interfaces include preamps, just as most analog mixing consoles integrated preamps in the pre-digital age.

Thanks to today’s technology, preamps are very neutral and transparent in the way they amplify the audio signal. In the past, preamps tended to subtly distort the sound, imparting a tonal character to the audio they processed; a sort of “sonic fingerprint” that music producers would become familiar with, and start to use in creative ways. This is what people usually refer to when they talk about ‘the sound’ of a mixing console. Running a session on a mixing console that used the 1073 preamps, for example, would give the whole track a harmonically exciting feel.

Now, you can enjoy the best of both worlds. You can use the preamps on your audio interface to get your signals to a usable level, and use Arturia’s software preamps to impart that iconic tone to your tracks.

A link to the past

There’s something quite magical about hearing classic songs. If you let your mind drift, you’re transported to a totally different time: different fashion, different politics, different tastes, different lives. If you want to evoke the feeling of the 70s or 80s, when the 1073 was used on practically every chart hit, the 1973-Pre makes it easy. Added to individual tracks in your song, you can add that toasty, harmonic, saturated sound that typified the era.

Load up 1973-Pre as an “insert” effect on channel, dial in an appropriate preset, and most of the hard work has been taken care of. You’ll now be mixing with the sound of a classic analog console, with the parameters set up by a top sound designer. Now you’re free to get creative, safe in the knowledge that you have half a century of legendary pro audio heritage supporting you.

They didn’t just want to make something that sounded like a 1073, they wanted to create a living, breathing emulation to bring you as close as possible to the joyous original, and go beyond your expectations. To do Rupert Neve’s brainchild justice, they analyzed the unique response of every electronic component of the hardware. To guarantee the best preamp sound, Arturia’s engineers travelled the world, visited studios, and spoke to producers and engineers who use their 1073 on every project.

When designing the 1973-Pre, Arturia's quest brought them to London, England. There, they were able to spend some time with unit #3392, an original unmodified 1073 built in 1971. This particular preamp helped shape the course of popular music for almost half a century. Now owned by Fish Factory Studio, it also played its part in creating iconic Blur and Gorillaz tracks when it was used by Damon Albarn’s sound engineer.

Taking its rightful place alongside the best performance keyboards, analog synths, and digital powerhouses in Arturia’s virtual hall of fame, the 1973-Pre is ready to show you what it’s made of.

Please fill out the form below and a Vintage King Audio Consultant will contact you with a ship date for the Arturia 1973 Preamp - Electronic Delivery.

Have a better price in mind for the Arturia 1973 Preamp - Electronic Delivery that you've been checking out? We're willing to work on it!Please fill out the form below with your contact information.Once the form is submitted, a Vintage King Audio Consultant will contact you as soon as possible with our best price on this product.