Handwired 312 preamp and 550A EQ in a 19" rack unit with limited edition, 50th-anniversary gold faceplate - limited to 50 units!
MFR# 862
Shop All API Audio
Skip to the end of the images gallery 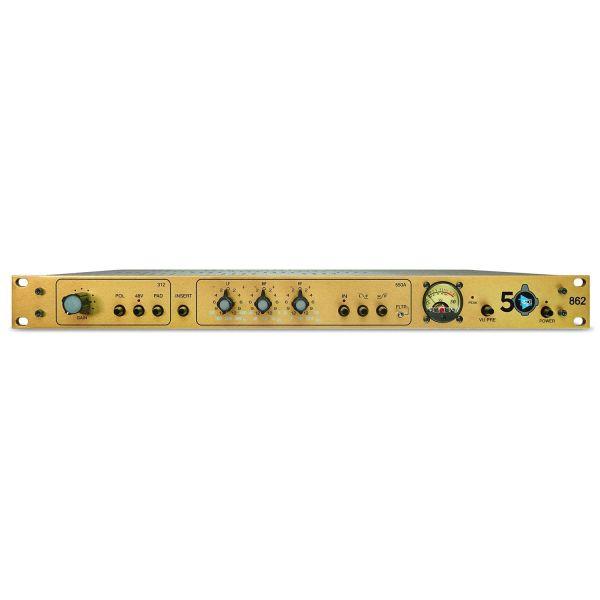 The API 862 is a limited run microphone preamp/EQ celebrating API's 50th anniversary. The 312 preamp and the 550A EQ are combined in a single, hand-wired 19-inch rack-mount unit. These special limited edition units are painstakingly hand-assembled, paying homage to the golden era of analog recording. The limited-production 50th-anniversary faceplate gives each unit a sleek, elegant feel.

The 312A preamp section is a faithful reproduction of the original 312 microphone preamp, utilizing Saul Walker’s original design from the 1970s. One of API’s most popular mic preamps, used extensively in their consoles, as well as the highly successful 3124 rack unit, the 312 is known for its bright, open, punchy sound. It has been a go-to preamp for engineers recording drums, rock guitars, bass, vocals and more.

The API 312 is capable of withstanding blisteringly high SPLs, making it an excellent choice for heavy-hitting drummers, screaming guitar amps, and particularly emphatic vocalists. Don’t worry though, the peak LED indicator will help keep you from clipping – or intentionally drive signals for added saturation.

The 550A EQ section is a near-identical reproduction of the legendary 550A 3-band equalizer designed by Saul Walker in the late 60s. The original 550A equalizer became API’s standard channel module EQ when the company began manufacturing consoles in 1971. Known for its bright, open, punchy sound, the API 550A EQ has been used on countless hit records over the decades. The 550A is equipped with API’s incomparable 2520 op-amp and innovative “Proportional Q” circuitry.

With 21 points of reciprocal equalization divided into three overlapping ranges, the 550A is capable of creating truly unique filter shapes. For added versatility, the high and low-frequency ranges can be used as peak or shelf filters. Frequency ranges and boost/cut are selected by three dual-concentric switches, and a pushbutton "in" switch allows the EQ to be silently introduced to the signal path.

Please fill out the form below and a Vintage King Audio Consultant will contact you with a ship date for the API 862 Mic Preamp/EQ - 50th Anniversary Series.

Have a better price in mind for the API 862 Mic Preamp/EQ - 50th Anniversary Series that you've been checking out? We're willing to work on it!Please fill out the form below with your contact information.Once the form is submitted, a Vintage King Audio Consultant will contact you as soon as possible with our best price on this product.