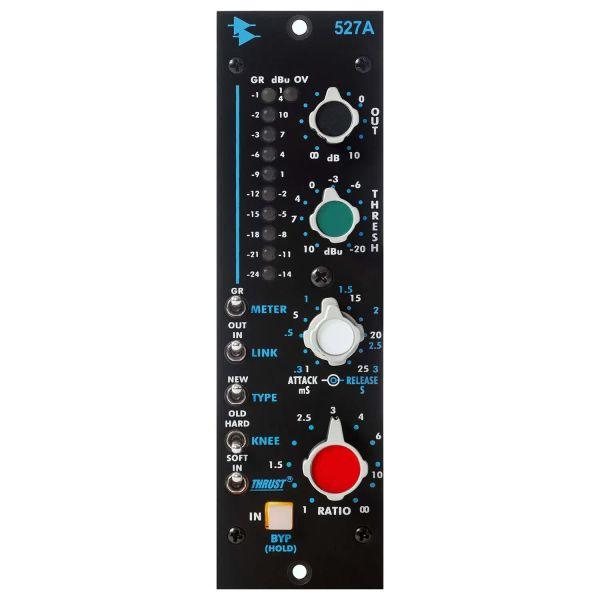 The API 527A Compressor/Limiter takes its place alongside the family of API VCA based compressors, including the 225L compressor and 529, 2500, and 2500+ stereo bus compressors. Anyone familiar with these units will immediately be at home with the 527A.

Features common to the line include “feed-forward” (NEW) and “feed-back” (OLD) gain reduction methods selectable on the front panel, provide a choice of “that old way” or “the new way” of compression, for the highest level of flexibility in signal gain control. The “old way” or feed-back method is what most of the classic compressors used for the gain control circuit. The “new way” gain reduction is more typical of the newer VCA type compressors that rely on RMS detectors for the gain control voltage.

There is a “SOFT”/”HARD” knee switch for an “over-easy” type compression resulting in a very natural, uncompressed sound or a typical sharp knee type that lends itself to a much more severe limiting effect.

The patented THRUST function can be switched in and out via the front panel as well, applying a filter before the RMS detector circuit that preserves that punchy bottom end.

Two or more 527A Compressor/Limiters can be linked together via a DC link allowing multiple units to be combined for stereo and multichannel applications.

The output level remains fairly constant regardless of the threshold or ratio control, much like the “more/less” Ceiling control on the API 525 Compressor. This allows for live adjustments without any noticeable gain changes in the program level.

The 527A Compressor/Limiter makes use of the 2510 and 2520 discrete op-amps and exhibits the reliability, long life, and signature sound which are characteristic of API products.

Please fill out the form below and a Vintage King Audio Consultant will contact you with a ship date for the API 527A 500 Series Compressor/Limiter.

Have a better price in mind for the API 527A 500 Series Compressor/Limiter that you've been checking out? We're willing to work on it!Please fill out the form below with your contact information.Once the form is submitted, a Vintage King Audio Consultant will contact you as soon as possible with our best price on this product.

VIEW
156755
I would like to thank VK for the wonderful sales assistance, service and prices. This was my first purchase with you and it won't be my last. I only wish I'd discovered you years ago!
Matthew R.
I had two Grammy wins this year - Ray LaMontagne & Carolina Chocolate Drops. Both made with help from Vintage King!
Ryan F.
In almost 20 years in Pro audio buying, never did I receive a unit so well packed and exactly as described. Works flawlessly. The whole process has been so smooth. I will never hesitate to do business with you guys in the future and will recommend you to everyone I know.
Martin C.
This was my first experience buying something from Vintage King (although I surf the "used" categories on the website frequently!), and, despite being on the other side of the world, I had absolutely no trouble and everything went very smoothly.
Phil T.
The speed of delivery exceeded my expectations! I was VERY pleased that my shipment arrived in time for a scheduled vocal tracking session. The packing insured that my order arrived safely. And the sales staff responded quickly to questions regarding the product.
James P.
Thank you so much! Vintage King has been so fair and easy to work with. I can't thank you enough. It feels good to trust such a hefty purchase to folks who are so helpful and knowledgeable. Vintage King is a sound designers dream store.
Noa L.
You guys have excellent customer service and I am excited about the next upgrade I complete on my fifth recording facility. I've been in the studio business for forty plus years. The salesman I worked with at Vintage King was the best of the best. You all rock!
Robby T.
I would recommend Vintage King to any one looking for top-class gear, unbeatable customer service and the best prices on the map!
Jake D.
My experience with Vintage King was excellent. The order was here fast considering it was out of stock. The sales person had SKB send it to me directly and I couldn't have been more pleased.
Michael D.
From the minute I placed my order I was kept well-informed through each step in your process. Even though I was buying a comparatively modest piece of gear, your attention to detail made me feel like I was purchasing a six-figure mixing desk.
Thomas W.
I am a new customer of yours. You guys provided me the absolute best deals in ordering all the equipment to power my brand new recording studio. Your customer service is amazing and i will always deal with you from here on out.
Rob M.
Thanks for your great service and getting this out today. You guys really are the Kings!
Alan B.
Better than expected! Truly impeccable service. Your team was professional, knowledgeable, provided speedy delivery above and beyond standard. Vintage King Audio is definitely my go to for all of my audio and information needs.
James O.