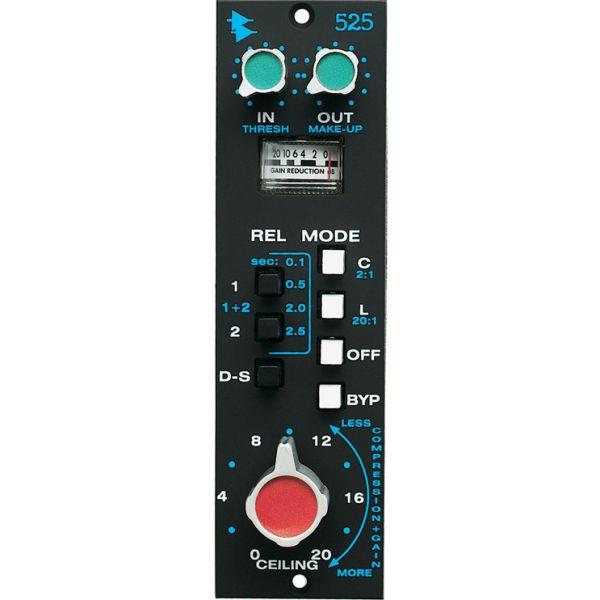 The API 525, originally released in the 70s, is a feedback type compressor, such as the 1176 and 660, etc.  An input control and output control are provided.  An additional ceiling fine tune function modifies threshold and make-up gain for precise changes in compression without changes in output.  A compression/limit switch sets ratio at either 2:1 or 20:1.  Attack time is as fast as 15u/s.  Four auto release modes are offered via two switches, 0.1s, 0.5s, 1.5s & 2.0s.  A de-ess function inserts an inverse vocal energy curve filter in the detector for effective sibilance/p-pop reduction.  The 525 is an identical re-issue of one of the most popular API products ever.

The API 525 is perhaps the most successful solid state feedback compressor in history.  It delivers dynamics control behavior unlike VCA feed forward compressors so common today.   A remarkable multi-function ceiling control can increase gain reduction while simultaneously raising output level to match, so the user can alter dynamics on the fly without level changes.  This re-issue design has been taken from the original blue prints and spec control drawings from the API archives.

Release times vary with frequency, with high frequency/full bandwidth content released faster than just low frequency for natural envelope tracking.  Attack time is fixed, chosen to catch the fastest peaks without pumping.  Equally useful as a tracking, mixdown or program compressor/limiter, the benefits of the API 525 are most obvious to those who use compression on a regular basis.  Vintage dynamics control, an easy-to-use multi-function control set and a wide range of 500 Series mounting options assure that the 525 will surpass your most critical applications.  With the addition of a hard-wire bypass switch, a balanced input and a pinout that is the same as all the other 500 series modules, the 525 is still, after 25 years—"the sound."  Two or more 525s can be linked for multi-channel compression.

The 525 feedback compressor/limiter makes use of the 2510 and 2520 op-amps and therefore exhibits the reliability, long life and uniformity which are characteristic of API products.

Please fill out the form below and a Vintage King Audio Consultant will contact you with a ship date for the API 525 500 Series Compressor.

Have a better price in mind for the API 525 500 Series Compressor that you've been checking out? We're willing to work on it!Please fill out the form below with your contact information.Once the form is submitted, a Vintage King Audio Consultant will contact you as soon as possible with our best price on this product.