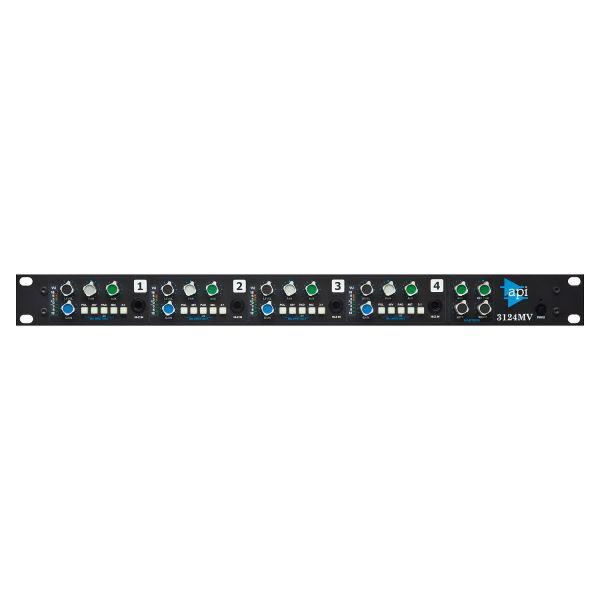 The API 3124MV is an all-in-one 4-channel mic/line preamp and stereo mixer that offers API’s legendary sound in a compact rack unit with an intuitive interface. Designed for professional engineers to use onstage, in broadcast rigs, and in the recording studio, the 3124MV has everything you need to quickly and easily record great tracks.

Recording consoles can be big, bulky and expensive. 500 series modules are great but they don’t always offer enough space to execute some of the more complex analog designs. The 3124MV packs four channels of API’s signature preamps in a compact rack unit, allowing you to capture great recordings anywhere there’s great music.

The 3124MV also includes a built-in stereo mixer for additional flexibility and control. All four channels are equipped with y-cable inserts and a post-fader aux send, allowing you to create the ultimate signal chain while recording or mixing. The built-in aux return pot allows you to blend in subtle time-based effects or powerful parallel processing.

When Saul Walker started API in 1968, one of his first inventions was the 2520 op amp, which has been an integral part to API’s bright, punchy, clear sound. The 3124MV continues API’s 50 year legacy of by utilizing the same classic API circuit design and 2520 op amps used in their consoles.

After the release of the their first console, API quickly became the leading console manufacturer for radio and television networks. It didn’t take long for recording studios to catch on, and soon API began receiving rave reviews from engineers and producers on the tonal quality of their preamps. To this day, over 700 API consoles are in use across the nation and around the world. Albums like Rumours by Fleetwood Mac, Wasting Light by Foo Fighters and Van Halen’s eponymous debut are shining testaments of the quality and range of API preamps.

Please fill out the form below and a Vintage King Audio Consultant will contact you with a ship date for the API 3124MV 4-Channel Microphone Preamp.

Have a better price in mind for the API 3124MV 4-Channel Microphone Preamp that you've been checking out? We're willing to work on it!Please fill out the form below with your contact information.Once the form is submitted, a Vintage King Audio Consultant will contact you as soon as possible with our best price on this product.