$ 695 .00
or $20/month for 36 months 0% interest for 36 months. 36 equal monthly payments required. Learn more
In Stock
Item is in stock and will ship the next business day. Place your order before 4:00pm ET Mon-Fri and we will ship your items the same day. 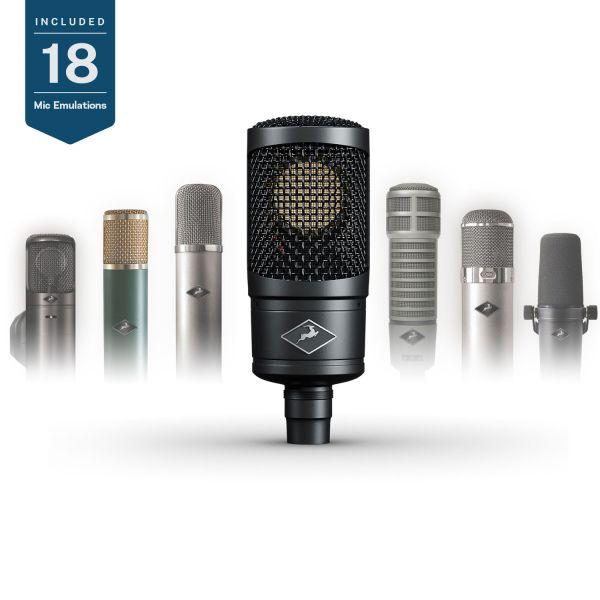 The Antelope Audio Edge Solo is a large diaphragm condenser microphone, with a cardioid pickup pattern, that delivers clean and natural recordings with any interface or preamp. The microphone is designed for the artist/engineer who needs one solution for numerous situations and applications. In addition to the high-performance hardware, Antelope Audio has developed a proprietary Modeling Engine that adds advanced tone-shaping to the microphone’s own pristine sound. The 18 different mic emulations make this a highly adaptive and effective recording tool - suitable for home- and professional-studio recordings of vocals, acoustic instruments, guitar & bass cabs, as well as drums & percussion.

A Mic That Stands On Its Own

A Plethora of Tone-Shaping Emulations

In addition to its own pristine sound, the Edge Solo has the ability to mimic 18 of the most popular mics - from dynamic classics to rare Tube & FET large-diaphragm condensers that have stood the test of time. To develop the emulations, Antelope Audio has worked with several revered European facilities, making rigorous measurements and testing multiple exquisitely preserved vintage microphones, as well as modern high-end classics. The 18 emulations provide the necessary sonic versatility needed to suit any voice or instrument both at home and in the studio.

A New Vision for the Recording Experience

The purpose of the Edge Solo and all other modeling microphones in Antelope Audio’s portfolio is to not only equip you with a variety of sonically versatile emulations in one body but to also expand your scope of recording abilities with features not available with conventional microphones. The modeling engine enhances your workflow by allowing you to switch between microphone emulations with a single click during recording or post-production. The dual-diaphragm design complements this further by also enabling polarity alterations at any stage of your production. When paired with an Antelope Audio interface you can benefit from imperceptible latency while picking the best mic emulation for the job during tracking. If you prefer, record without any modeling, and alter the sound later on with the native emulation plug-ins, compatible with any DAW or interface.

Please note: iLok 2 or 3 required to use emulations as native plug-ins within your DAW

Antelope Audio is a digital audio equipment manufacturer delivering high-resolution sound to acclaimed recording studios worldwide. The company’s rise to fame can be traced back to their innovative master clocks and award-winning audio interfaces. In recent years they have leveraged their sonic expertise to create а line of modeling microphones.

I really love this mic. It sounds christal clear plugged into Antelope Zen Audio Synergy Core and the emulations are amazing. I am ABing many mics I have in studio with dedicated external preamps to this mic and I very impressed: it sounds AMAZING. I think it is going to become my go to mic for quick voiceovers or recordings because it is so easy to set up, getting a clean recording, and then find the color you want in the "mic locker". For the price, it is a steal. It is so good that I am thinking to sell some of my other mics and preamps.

Versatile good sounding mic with caveat. Full functionality on input only if you have an antelope audio interface. If you're like me using Apollo or any other interface you have to insert the modeling effect in your daw like a vst plugin.

This thing’s really cool! I own a couple of the mics it emulates and if you close your eyes it feels about right. I also love the size of this thing. Perfect mic for me.

It is a good mic, being free, it is really good, the mic emulations well, I can’t really say, I own a couple of the emulated models(414, TLM103 etc) but I feel these mics are very useful, just don’t try and compare its pointless

I give the Antelope Audio Microphone Modeling System a Five Star Rating.
If you are a professional studio or an audio enthusiast the power if these microphones is amazing. . .
The flexibility of the microphones truly gives you different microphones with one device.
Add to your microphone locker today. . . .

The Antelope Edge Solo is truly a wonderful and much needed quality modeling microphone. It has the ability to take on the characteristics of many of the world’s most sought after vintage microphones. Coupled with Antelope’s virtual mic preamps, compressors and equalizers, there’s no excuse for not finding the right vocal chain for any vocalist or instrument. I absolutely love mine and highly recommend it! You won’t be disappointed.

My first Antelope gear, It's an excellent product, very versatile for any kind of use, Really happy with it

When I told a few friend of mine that I was going the modeling route with microphones they were very skeptical, but let me tell you this thing has made a believer out of all of us. Its a great mic on its one but adequately models top of line vintage microphones. You can really tell the difference as you rotate through different microphones. Antelope is awesome!

Please fill out the form below and a Vintage King Audio Consultant will contact you with a ship date for the Antelope Audio Edge Solo Modeling Microphone.

Have a better price in mind for the Antelope Audio Edge Solo Modeling Microphone that you've been checking out? We're willing to work on it!Please fill out the form below with your contact information.Once the form is submitted, a Vintage King Audio Consultant will contact you as soon as possible with our best price on this product.