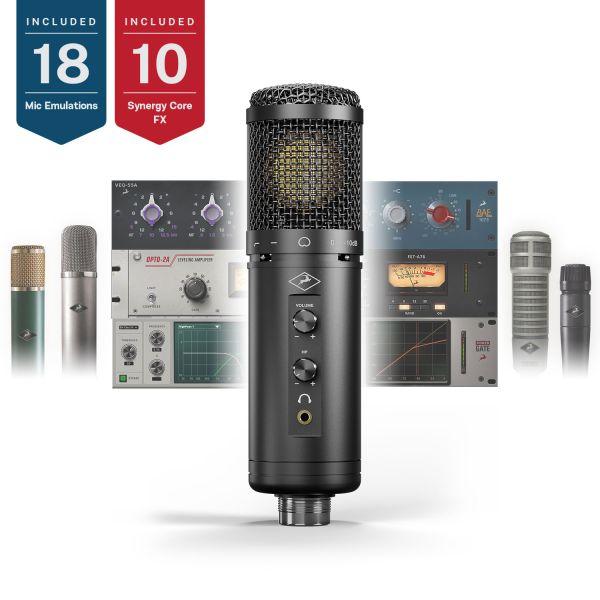 The microphone includes a collection of onboard Synergy Core effects and emulations of classic mics such as the Berlin 47 FT for ultimate kick drum sounds, the Berlin 87 for vocals and instruments and many more. Real-time processing powered by DSP and FPGA chips will keep your monitoring under 1ms of latency! Axino Synergy Core is a USB bus-powered large diaphragm microphone and there is no need for an external pre-amplifier or audio interface.

Axino gives access to a complete virtual studio with a selection of Synergy Core effects and an outstanding modeling engine. A large gold-sputtered diaphragm condenser microphone offers a low self-noise for clean and natural-sounding recordings. The modeling engine will give you access to 18 different emulations from dynamic classics to rare Tube & FET microphones loved by generations of artists and engineers. Keeping a low latency and the ability to apply the emulation in real-time allows for flexible and easy experimentation. Apply a -10 dB pad for optimizing louder signals and take advantage of the built-in hi-pass filter for cleaner audio recordings.

Simple, Elegant, and Made for Creators

The Axino Synergy Core needs only headphones and a laptop, with a USB connection, to work. Record on the go or just as soon as the inspiration comes to you! The control panel allows for effortless configuration of effects and speedy workflow, allowing users to quickly make voice-overs, podcasts, and live stream sounds up-to-par with everyone’s favorite content creators.

Antelope Audio Axino comes with 8 effects that suit all core recording needs. Reverb, compression, EQ, noise gate, and de-esser are used to create radio-ready sounds straight out of the box. The virtual studio can also be expanded with emulations of classic hardware and third-party effects like Antares Auto-Tune, Groove Hill’s Liverpool, and Gyraf Audio’s Gyratec EQs.

Please fill out the form below and a Vintage King Audio Consultant will contact you with a ship date for the Antelope Audio Axino Synergy Core Cardioid USB Modeling Microphone.

Have a better price in mind for the Antelope Audio Axino Synergy Core Cardioid USB Modeling Microphone that you've been checking out? We're willing to work on it!Please fill out the form below with your contact information.Once the form is submitted, a Vintage King Audio Consultant will contact you as soon as possible with our best price on this product.