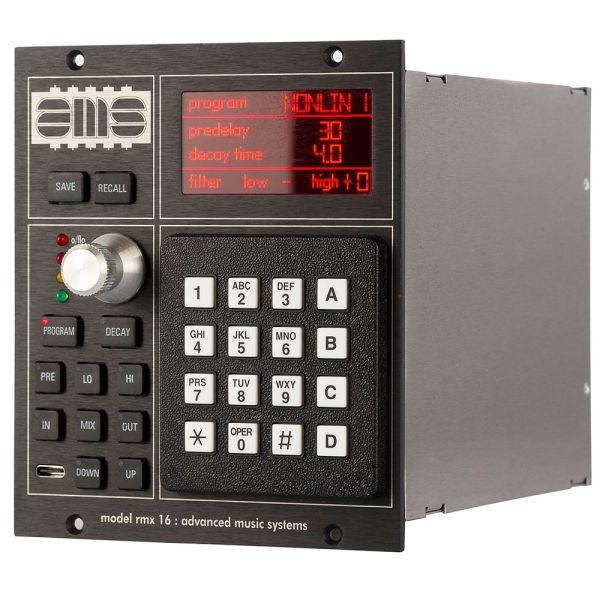 The AMS RMX16 500 Series Digital Reverb Module puts the lush, vibrant tones of the world’s first digital reverberator right at your fingertips in a compact, 500 series format. Equipped with all 18 of the original reverb programs, the AMS RMX16 module is the perfect tool for adding depth, space or vintage 80s vibe to any track.

Originally released in 1981, the AMS RMX16 was the world’s first microprocessor-controlled, full-bandwidth digital reverberator. Used on countless hit records over the years, from Phil Collins and Peter Gabriel to U2 and Radiohead, the RMX16 is one of the most unique-sounding studio signal processors ever made. From lush halls and dense plates to special effects like chorus and echo, or even the iconic Non-Lin ‘gated reverb’ sound—the RMX16 does it all.

The new AMS RMX16 500 series digital reverberation module includes all nine of the original reverb programs, including Ambience, Room A1, Hall C1, Plate A1, Hall B3, Chorus, Echo, Non-Lin 2, and Reverse 1. This new RMX16 also features the additional nine programs stored in the bar code wand, including Delay, Freeze, Hall A1, Non-Lin 1, Image P1, Plate B1, Reverse 2, Room A0, and Room B1.

While the new AMS RMX16 500 series digital reverberation module features the same classic look and feel as the original, it’s also sporting a few new features under the hood. The new RMX16 offers independent control over every parameter using 28 buttons and an all-new rotary push encoder for quick and easy selection. Two new buttons include dedicated Save and Recall buttons, designed to significantly speed up your workflow. The new large OLED display offers super-simple navigation and visual feedback when programming sounds. And with the new wet-dry mix blend function, you can quickly dial in the perfect amount of depth and space for any track.

Sounds great, easy to use, and more creatively inspiring than a plugin. Great piece!

It’s great that this is available in such a format that’s reliable and great sounding, not only that, it has all the sounds that were available from the earlier years and stayed true to their unique sound. I’m glad I purchased two to run in tandem with each other, this should create a tapestry I’ve been looking for, thank you AMS!

I bought 3 pieces of gear and new monitors when I took over RPM. The RMX 16, DMX 16 and a Quantec. We trippled the gross bookings in the year that followed and the AMS gear was in high demand. They were about $10,000 back then and well worth it.

Please fill out the form below and a Vintage King Audio Consultant will contact you with a ship date for the AMS RMX16 500 Series Digital Reverb Module.

Have a better price in mind for the AMS RMX16 500 Series Digital Reverb Module that you've been checking out? We're willing to work on it!Please fill out the form below with your contact information.Once the form is submitted, a Vintage King Audio Consultant will contact you as soon as possible with our best price on this product.