$ 579 .99
Your Savings: $ 19 .01 Msrp: $ 599 .00
No interest if paid in full within 12 months Learn more
Ships directly from Allen and Heath
Note: This item may not be returnable or could require a restocking fee. Contact one of our Audio Consultants for more details. This item ships directly to you from the manufacturer. To ensure that the manufacturer currently has stock, please chat, call or email for the latest availability status. 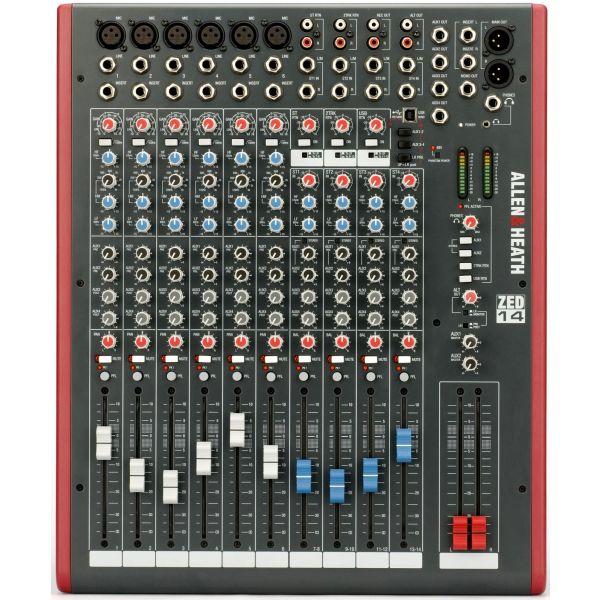 Allen & Heath ZED-14 is a fantastic entry-level mixer for small bands, solo performers or AV applications. Its comprehensive feature set, compact size and fine lines combine to make it one of the best small mixers around. Provided with 6 mic or line inputs, 4 stereo inputs with EQ, there are an incredible 157 controls on the front panel of the ZED-14.

This is a mixer for anyone, from entry-level to professionals, who appreciates fantastic sound, rugged build quality and imaginative feature sets. It�ll be equally happy running your gig on stage, recording live or mixing down in your studio at home.

Features
USB audio flexibility
Getting audio to and from a computer easily is now a common requirement for live sound and music production. The way this has been implemented on ZED is super-flexible and super-easy! No longer do you need to fiddle around the back of your PC to get to the soundcard inputs, only to find that the levels are all wrong and noisy. Just plug in a USB lead to your ZED, select the USB routing on the mixer and the device on your computer and that's it! CD quality audio to and from your PC or Mac. Switches and connection through jack socket terminals provide different send/return configurations:

DuoPreﾪ
Based on the proven pre-amps from the hugely successful PA series, ZED-14 has DuoPre pre-amps, which use a two stage design, with carefully controlled amounts of gain in each stage. When amplifying the signal from the XLR input, the gain range is huge - 69dB of range to be exact - and is very evenly distributed around the gain control, meaning better control of signal level. Most of the gain comes from the first stage, so unwanted noise is kept to a minimum. Line level signals are simply plugged into the second stage of the pre-amp by using the line input jack socket, which has the great advantage of less noise when using the line input and also matching to a
higher input impedance.
SONAR LE � Provided Free!
We�ve included Cakewalk SONAR LE with ZED-14 so you can immediately start to use it to create your own music � just add a PC and it couldn�t be easier to get going. You�ll be able to record from your ZED mixer, create tracks and arrange songs, then play back to ZED via the USB port. You can use SONAR LE and your ZED mixer together in many ways � e.g. straightforward recording of a stereo mix, recording tracks individually to build up a song, or using the USB port and software as an effects loop.

Please fill out the form below and a Vintage King Audio Consultant will contact you with a ship date for the Allen & Heath ZED-14.

Have a better price in mind for the Allen & Heath ZED-14 that you've been checking out? We're willing to work on it!Please fill out the form below with your contact information.Once the form is submitted, a Vintage King Audio Consultant will contact you as soon as possible with our best price on this product.