$ 2,298 .00
or $48/month for 48 months 0% interest for 48 months. 48 equal monthly payments required. Learn more
Ships directly from AEA
Note: This item may not be returnable or could require a restocking fee. Contact one of our Audio Consultants for more details. This item ships directly to you from the manufacturer. To ensure that the manufacturer currently has stock, please chat, call or email for the latest availability status. 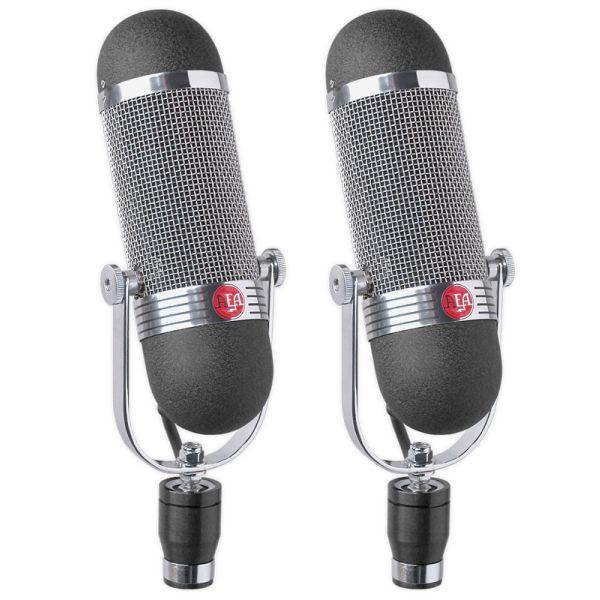 Based on the character of the legendary R44, the AEA R84 Ribbon Microphone provides classic tonality with extended top-end and reduced proximity effect for medium and close range recording.

In 2000, AEA sought to design a more compact, lighter and less expensive version of the hefty, eight-pound RCA 44BX. The result was the R84, which includes the best of the 44 series in a lower cost, three-pound package.

The R84 and original RCA 44 (now the R44C) share the same Big Ribbon element, transformer and other elements in the design. By using modern design techniques and stronger — but smaller — magnets in the R84, the classic RCA ribbon sound is retained.

However, the R84 has improvements — including less proximity effect, better top end, vibration isolation and greater placement flexibility on tight stages and in studios. The mic’s U-shaped yoke acts as a shock mount and also enables the user to position the R84 at numerous angles even with a straight stand.

The R84 series quickly endears itself to engineers and musicians due to its remarkably expansive frequency range complete with sweeping highs and booming lows.

The R84’s balanced and manageable proximity effect just feet away from the source bolsters the low end of vocals, drums, and brass. With a ribbon mic as multi-purpose, lightweight, and maneuverable as the R84, it is well-suited for both close-up and ambient mic applications.

The R84A retains the same sonic character of the R84 but offers an additional 12 dB of output and a stable impedance giving it even more flexibility when used with quiet sources and any preamp.

The R84 is a staple in numerous recording studios because of its unique tonality and classic sound. Its smooth, high-frequency roll-off and reduced sibilance make it the go-to choice for engineers tracking vocals and other instruments that often sound harsh when recorded with condenser mics.

The R84’s gorgeous mid-range captures the unique qualities of many instruments with detailed elegance. Its large low end is perfect for beefing up the sound of drum kits or thickening up the bass in thin vocals. It’s a mic that works well on practically any voice or musical instrument, making it useful tool in both recording and broadcast studios.

Please fill out the form below and a Vintage King Audio Consultant will contact you with a ship date for the AEA R84 Ribbon Microphone - Matched Pair.

Have a better price in mind for the AEA R84 Ribbon Microphone - Matched Pair that you've been checking out? We're willing to work on it!Please fill out the form below with your contact information.Once the form is submitted, a Vintage King Audio Consultant will contact you as soon as possible with our best price on this product.

VIEW
1664
I would like to thank VK for the wonderful sales assistance, service and prices. This was my first purchase with you and it won't be my last. I only wish I'd discovered you years ago!
Matthew R.
I had two Grammy wins this year - Ray LaMontagne & Carolina Chocolate Drops. Both made with help from Vintage King!
Ryan F.
In almost 20 years in Pro audio buying, never did I receive a unit so well packed and exactly as described. Works flawlessly. The whole process has been so smooth. I will never hesitate to do business with you guys in the future and will recommend you to everyone I know.
Martin C.
This was my first experience buying something from Vintage King (although I surf the "used" categories on the website frequently!), and, despite being on the other side of the world, I had absolutely no trouble and everything went very smoothly.
Phil T.
The speed of delivery exceeded my expectations! I was VERY pleased that my shipment arrived in time for a scheduled vocal tracking session. The packing insured that my order arrived safely. And the sales staff responded quickly to questions regarding the product.
James P.
Thank you so much! Vintage King has been so fair and easy to work with. I can't thank you enough. It feels good to trust such a hefty purchase to folks who are so helpful and knowledgeable. Vintage King is a sound designers dream store.
Noa L.
You guys have excellent customer service and I am excited about the next upgrade I complete on my fifth recording facility. I've been in the studio business for forty plus years. The salesman I worked with at Vintage King was the best of the best. You all rock!
Robby T.
I would recommend Vintage King to any one looking for top-class gear, unbeatable customer service and the best prices on the map!
Jake D.
My experience with Vintage King was excellent. The order was here fast considering it was out of stock. The sales person had SKB send it to me directly and I couldn't have been more pleased.
Michael D.
From the minute I placed my order I was kept well-informed through each step in your process. Even though I was buying a comparatively modest piece of gear, your attention to detail made me feel like I was purchasing a six-figure mixing desk.
Thomas W.
I am a new customer of yours. You guys provided me the absolute best deals in ordering all the equipment to power my brand new recording studio. Your customer service is amazing and i will always deal with you from here on out.
Rob M.
Thanks for your great service and getting this out today. You guys really are the Kings!
Alan B.
Better than expected! Truly impeccable service. Your team was professional, knowledgeable, provided speedy delivery above and beyond standard. Vintage King Audio is definitely my go to for all of my audio and information needs.
James O.