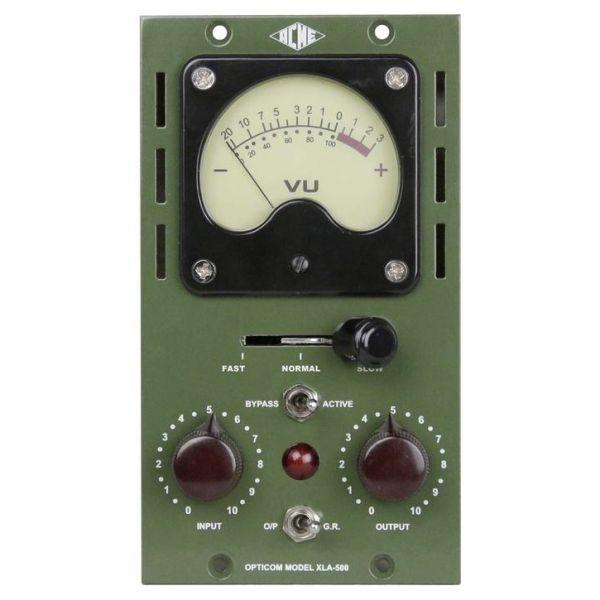 In a new era of condensed circuits and smaller sizes, Acme Audio has taken their Opticom XLA-3 MKII and brought it to the 500 Series platform for the first time ever with the Acme Audio Opticom XLA-500. While the design has been scaled down, the 500 Series module remains a tube compressor with one tube in its makeup. With a transformer in and out, the unit is all cinemag and still features the triple optoelectronic circuit of its predecessor. The unit features the same functionality, but with a more focused sound and some beefy results.

The Birth of the Opticom XLA-3 MKII

Despite falling in love with the naturally smooth compression of the Teletronix LA-2A in his years of engineering and producing, Acme Audio’s Al Sutton (Kid Rock/John Fogerty) pined for something more from the storied limiter. That certain “something” revolved around adding multiple speeds to the classic unit’s single speed of compression. The end result was the Acme Audio Opticom XLA-3 MKII, which brought three speeds to one box via a unique triple optoelectronic circuit. A smaller version of this circuit now finds a home in the 500 Series version as well.

The original design of the LA-2A has tended to vary from unit to unit, providing engineers with different results based on what they own. The Opticom XLA-500 brings three speeds, Slow, Medium and Fast, together into one single module. At its slowest compression speed, the Opticom XLA-500 features slow attack and release times, which closely resemble a broadcast limiter that just holds the mix together. The medium speed is where fans of the LA-2A will find their favorite setting, as this is the option that is closest to the speed of the original Teletronix unit. Set to the Fast option, the unit can be compared to an all-button 1176 and creates some crunchy sounds on bass and drums.

"On a recent mix for Fergie’s new album the amp section on the Opticom provided the character we needed to make her vocal stand out. If you want gentle compression or ton’s of attitude the Opticom has you covered!"
- Tony Maserati

Please fill out the form below and a Vintage King Audio Consultant will contact you with a ship date for the Acme Audio Opticom XLA-500 500 Series Tube Compressor.

Have a better price in mind for the Acme Audio Opticom XLA-500 500 Series Tube Compressor that you've been checking out? We're willing to work on it!Please fill out the form below with your contact information.Once the form is submitted, a Vintage King Audio Consultant will contact you as soon as possible with our best price on this product.