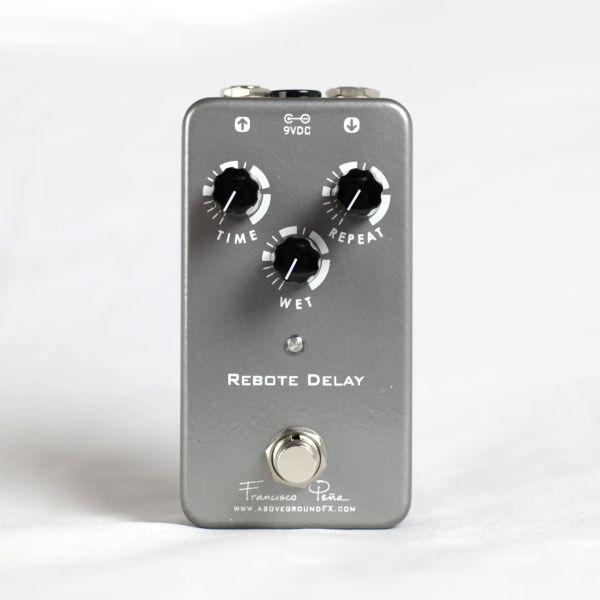 Delay pedal sounds are defined by the technology behind them—warm analog delays, sterile digital delays or tape echoes with warmth and wobbliness. In the boutique pedal universe, users are accustomed to seeing anachronistic technology like discreet germanium transistors brought back from the dead because, well, if the tone you want is a geranium fuzz, nothing really does it like the real thing. As the old Bulgarian proverb says, “If you wish to drown, why torture yourself with shallow water?”

That’s why the hip players cling to analog delays and crusty tape echoes. With digital delays, the repeated notes are exact copies of the original, whereas bucket-brigade analog is forced to use stronger noise filtering on the repeats causing high frequency content loss on each repeat. Whilst technically abhorrent, this creates the warm sound players dig. Tape echoes are even freakier in the way they mutate repeats by introducing analog distortion and pitch shift plus a key musical artifact—each repeat is increasingly lower fidelity than the previous, making the repeats distinct among themselves as well.

Since this whole boutique thing is supposed to be about thinking outside the box, Peña figured he could use a PT-2399 delay chip to do the signal delay in an efficient fashion, without the noise, power consumption and expense of hard to acquire analog chips.

The Rebote Delay circuit takes the dry signal to the output maintaining signal bandwidth integrity, then each repeat is filtered with analog circuitry that resembles tape technology. When pushing the limits of Rebote’s delay time, the quality of the repeats degrades allowing distinct tone between the dry signal and the repeats. The results are responsive rhythmic echoes that sound musical and decay naturally, from slap back echo to 560ms of delay.

The results speak for themselves. Rebote Delay pumps out gobs of deliciously warm echoes that go straight to whatever part of our animal brain that goes goofy over good delay sound. The Rebote Delay’s tones have some sort of psycho acoustic effect that we find hard to describe with mere words. Its repeats have a soothing yet weird underwater quality that is more pleasantly drifting than panic drowning. Rebote Delay is fantastic for any style of playing where delay is integral to the tone—from Rockabilly to spacey epic Pink Floyd style solos.

Please fill out the form below and a Vintage King Audio Consultant will contact you with a ship date for the AboveGroundFX Rebote Delay Pedal.

Have a better price in mind for the AboveGroundFX Rebote Delay Pedal that you've been checking out? We're willing to work on it!Please fill out the form below with your contact information.Once the form is submitted, a Vintage King Audio Consultant will contact you as soon as possible with our best price on this product.