$ 2,550 .00
Your Savings: $ 45 .00 Msrp: $ 2,595 .00
No interest if paid in full within 18 months Learn more
Special Order
Note: This item may not be returnable or could require a restocking fee. Contact one of our Audio Consultants for more details. Due to the special nature of this item, we order each unit fresh from the factory, exclusively for you! Lead times may vary so please chat, call or email for up-to-date inventory status.

A 2-channel, solid state/tube hybrid offering infinite sound-shaping possibilities plus the ability to enhance any signal simply by passing through it
MFR# HM2 Nail Comp
Shop All A Designs
Skip to the end of the images gallery 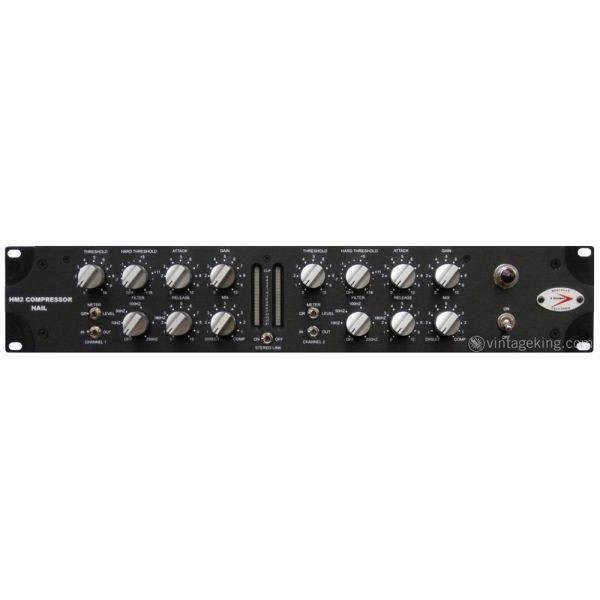 Awarded a “Mix Certified Hit” by Mix magazine, the A-Designs Audio HM2 NAIL Compressor/Limiter has three unique features that set it apart from ordinary compressors: Hard Threshold, Filter, and Mix. But that’s not where it ends. The NAIL’s tube circuitry and components were specifically chosen and designed to impart the rich, euphonic sound of analog to digital recording—enabling it to confidently “ride” the 2-bus in a place of prominence. And while the NAIL can add character to any sound, it can also work transparently in the background—all at the engineer’s discretion. Not just for the 2-bus, its ability to switch from linked stereo to dual mono makes it a great tracking compressor as well. Better still, on a stereo mix, using dual mono offers the added bonus of making the mix sound wider, as though it extends beyond the left/right boundaries of the speakers.

Threshold, Hard Threshold and Variable Sidechain Filter
Upon inspecting the NAIL’s highly attractive custom-milled aluminum knobs and faceplate, you’ll notice the absence of a ratio control. In its place are Threshold and Hard Threshold. With Hard Threshold turned off, Threshold acts much like an LA-2A by increasing gain reduction. Attack and release controls become somewhat irrelevant in this mode and the NAIL becomes a model of simplicity; set its threshold and gain, and let the NAIL work its magic.

For those who like to dig deeper, Hard Threshold opens up a world of compression-/envelope-shaping possibilities. Like the hard knee of a traditional compressor, Hard Threshold works in conjunction with the Filter, which is a variable high-pass filter continuously controllable from 8Hz to 250Hz. Once the Hard Threshold is crossed, the NAIL will apply desired compression above the selected frequency, and less to the frequencies below. This prevents the greater energy of bass from triggering unwanted compression and ducking the entire mix. Filter also lets you enhance bottom end for bass-heavy music without throwing the mix’s entire frequency spectrum out of whack, as a multi-band compressor often does.

Put simply, the combination of Threshold, Hard Threshold, and Filter allow you to dial in amount of compression, at what level it will engage, and above which frequencies it will act. Ratio is always self-adjusting in response to program material.

Attack, Release, Gain and Metering
The HM2 NAIL’s remaining continuously variable controls include Attack, Release, and Gain, which function as expected. However, Attack and Release are dependent on the settings of the Hard Threshold and also respond dynamically to program material, making for a more forgiving and musical response than traditional “once size fits all” attack/release circuits. Other functions include compressor In/Out for quick A/B comparison; Stereo Link/Dual Mono; and Gain Reduction/Level for metering, all controlled via toggle switch. Speaking of meters, the NAIL’s LED meter was chosen for it’s ultra fast response and the ability to see it clearly from across a dark-lit control room.

Mix Control
The HM2 NAIL’s Mix knob offers continuously variable control between direct (dry) and compressed signal. Particularly useful for DAW mixing, Mix enables you to apply parallel compression to a submix without losing two channels of A/D/A for an aux send/return. And of course, you can also use it on an overall mix to add size and depth, or during tracking.   As its name suggests, when it comes to putting the finishing touches on a final mix, the A-Designs HM2 Compressor Nails it!

Please fill out the form below and a Vintage King Audio Consultant will contact you with a ship date for the A Designs Audio HM2 Compressor Nail 2-Channel Compressor.

Have a better price in mind for the A Designs Audio HM2 Compressor Nail 2-Channel Compressor that you've been checking out? We're willing to work on it!Please fill out the form below with your contact information.Once the form is submitted, a Vintage King Audio Consultant will contact you as soon as possible with our best price on this product.

VIEW
14435
I would like to thank VK for the wonderful sales assistance, service and prices. This was my first purchase with you and it won't be my last. I only wish I'd discovered you years ago!
Matthew R.
I had two Grammy wins this year - Ray LaMontagne & Carolina Chocolate Drops. Both made with help from Vintage King!
Ryan F.
In almost 20 years in Pro audio buying, never did I receive a unit so well packed and exactly as described. Works flawlessly. The whole process has been so smooth. I will never hesitate to do business with you guys in the future and will recommend you to everyone I know.
Martin C.
This was my first experience buying something from Vintage King (although I surf the "used" categories on the website frequently!), and, despite being on the other side of the world, I had absolutely no trouble and everything went very smoothly.
Phil T.
The speed of delivery exceeded my expectations! I was VERY pleased that my shipment arrived in time for a scheduled vocal tracking session. The packing insured that my order arrived safely. And the sales staff responded quickly to questions regarding the product.
James P.
Thank you so much! Vintage King has been so fair and easy to work with. I can't thank you enough. It feels good to trust such a hefty purchase to folks who are so helpful and knowledgeable. Vintage King is a sound designers dream store.
Noa L.
You guys have excellent customer service and I am excited about the next upgrade I complete on my fifth recording facility. I've been in the studio business for forty plus years. The salesman I worked with at Vintage King was the best of the best. You all rock!
Robby T.
I would recommend Vintage King to any one looking for top-class gear, unbeatable customer service and the best prices on the map!
Jake D.
My experience with Vintage King was excellent. The order was here fast considering it was out of stock. The sales person had SKB send it to me directly and I couldn't have been more pleased.
Michael D.
From the minute I placed my order I was kept well-informed through each step in your process. Even though I was buying a comparatively modest piece of gear, your attention to detail made me feel like I was purchasing a six-figure mixing desk.
Thomas W.
I am a new customer of yours. You guys provided me the absolute best deals in ordering all the equipment to power my brand new recording studio. Your customer service is amazing and i will always deal with you from here on out.
Rob M.
Thanks for your great service and getting this out today. You guys really are the Kings!
Alan B.
Better than expected! Truly impeccable service. Your team was professional, knowledgeable, provided speedy delivery above and beyond standard. Vintage King Audio is definitely my go to for all of my audio and information needs.
James O.