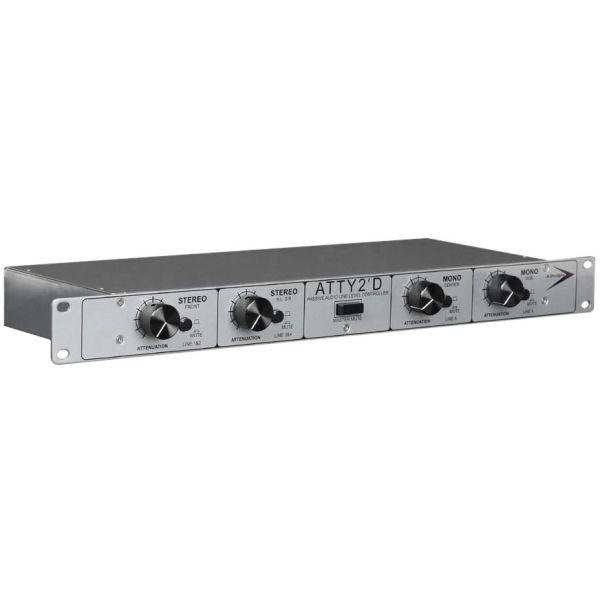 The A-Designs ATTY2’D (pronounced “attitude”) is the result of A-Designs Audio responding to the needs and requests of audio professionals who found its smaller sibling, the two-channel ATTY line-level attenuator, highly useful but desired more channels. A-Designs Audio gave them ATTY2’D, a six-channel 1U rackmountable version of the popular ATTY with dual stereo channels and two mono channels, each with level control and mute button—particularly handy if you’re working with multiple sets of stereo monitors. Better still, featured prominently in the center of ATTY2’D’s front panel is a large rectangular-shaped master mute switch that shuts of all six channels at once—perfect for a 5.1 surround setup. In fact, the front panel is silk-screened to reflect 5.1-surround operation.

Due to its 100% passive circuitry and XLR I/O, ATTY2’D easily integrates into your studio, whether you’re connecting directly to other XLR-equipped gear, studio monitors, or wiring it to a patchbay. And if you are looking for high-quality control of multi- monitor pairs, you won’t find a more affordable, practical solution than the ATTY2’D, thanks to its audiophile-quality components and passive design.

Applications
Apart from its ability to provide seamless, transparent attenuation for any line-level device, such as CD players, talkbacks, guitar/bass amp extension speakers, or audio surge protectors, it’s particularly handy as a preamp output gain control in multi-mic recording situations. For example, when tracking drums, kick and snare often require some level control to prevent clipping the converters. However many engineers would rather not color sound with pads or recording with compression. With the proper ATTY2’D, you can maintain input levels at the sweetspot and record without any adverse affects on sound quality. Plus, if you’re using a four-channel preamp with a hot output on toms, such as an API 3124, just use ATTY2’D’s dual stereo channels along with the mono channels on kick and snare—and Bob’s your uncle.   The most apparent use of ATTY2’D is for level control of multiple powered-monitor pairs. ATTY2’D’s single-knob stereo channels with individual mute buttons give you complete control over two pairs of powered monitors, while its mono channels allow you to control a subwoofer and single point-source speaker, such as an Avantone Active MixCube, for checking mono compatibility. Or, you can use the dual mono channels for a third stereo monitor pair along with Master Mute if you need to switch them off in a hurry (or simply enjoy the convenience).

ATTY2’D Adjustment
Speaking of monitor control, ATTY2’D makes a fine level controller for a 5.1 surround system, as reflected on the front-panel surround labeling scheme: Stereo / Front; Stereo SL/SR; Mono / Center; and Mono / Sub. Whether you’re using it for multiple stereo monitors or surround, to calibrate your ATTY2’d, turn level knobs for all speakers clockwise to maximum (labeled “Cal”), then calibrate from your software or console. Always start with “Sub.”

There you have it—now go and get yourself an ATTY2’D—by A-Designs Audio.

Please fill out the form below and a Vintage King Audio Consultant will contact you with a ship date for the A Designs Audio ATTY 2'D.

Have a better price in mind for the A Designs Audio ATTY 2'D that you've been checking out? We're willing to work on it!Please fill out the form below with your contact information.Once the form is submitted, a Vintage King Audio Consultant will contact you as soon as possible with our best price on this product.

VIEW
6802
I would like to thank VK for the wonderful sales assistance, service and prices. This was my first purchase with you and it won't be my last. I only wish I'd discovered you years ago!
Matthew R.
I had two Grammy wins this year - Ray LaMontagne & Carolina Chocolate Drops. Both made with help from Vintage King!
Ryan F.
In almost 20 years in Pro audio buying, never did I receive a unit so well packed and exactly as described. Works flawlessly. The whole process has been so smooth. I will never hesitate to do business with you guys in the future and will recommend you to everyone I know.
Martin C.
This was my first experience buying something from Vintage King (although I surf the "used" categories on the website frequently!), and, despite being on the other side of the world, I had absolutely no trouble and everything went very smoothly.
Phil T.
The speed of delivery exceeded my expectations! I was VERY pleased that my shipment arrived in time for a scheduled vocal tracking session. The packing insured that my order arrived safely. And the sales staff responded quickly to questions regarding the product.
James P.
Thank you so much! Vintage King has been so fair and easy to work with. I can't thank you enough. It feels good to trust such a hefty purchase to folks who are so helpful and knowledgeable. Vintage King is a sound designers dream store.
Noa L.
You guys have excellent customer service and I am excited about the next upgrade I complete on my fifth recording facility. I've been in the studio business for forty plus years. The salesman I worked with at Vintage King was the best of the best. You all rock!
Robby T.
I would recommend Vintage King to any one looking for top-class gear, unbeatable customer service and the best prices on the map!
Jake D.
My experience with Vintage King was excellent. The order was here fast considering it was out of stock. The sales person had SKB send it to me directly and I couldn't have been more pleased.
Michael D.
From the minute I placed my order I was kept well-informed through each step in your process. Even though I was buying a comparatively modest piece of gear, your attention to detail made me feel like I was purchasing a six-figure mixing desk.
Thomas W.
I am a new customer of yours. You guys provided me the absolute best deals in ordering all the equipment to power my brand new recording studio. Your customer service is amazing and i will always deal with you from here on out.
Rob M.
Thanks for your great service and getting this out today. You guys really are the Kings!
Alan B.
Better than expected! Truly impeccable service. Your team was professional, knowledgeable, provided speedy delivery above and beyond standard. Vintage King Audio is definitely my go to for all of my audio and information needs.
James O.